Bertrand makes the switch to Birmingham.

Chelsea manager Jose Mourinho has confirmed that left-back Ryan Bertrand has joined Aston Villa on-loan until the end of the season.

The 24-year-old has struggled for opportunities at Stamford Bridge this season since the return of Mourinho – despite the fact Ashley Cole has had issues with both form and fitness.

Instead of playing Bertrand on the left side of defence the Portuguese coach opted to switch Cesar Azpilicueta from right-back.

Although the Spaniard impressed it only served to exaggerate the fact that Mourinho would not be giving the England international much game time unless it was absolutely necessary – with the full-back having played just three matches this term.

Bertrand joined the Blues youth academy from Gillingham in 2005 before progressing to the first team a year later and has made 57 appearances in all competitions since.

This included a start in the west London club’s Champions League final triumph in 2012, the first time the Englishman had played in Europe.

Bertrand has previously enjoyed successful loan spells at Norwich City, Reading and Nottingham Forest and is delighted to now be with Villa. 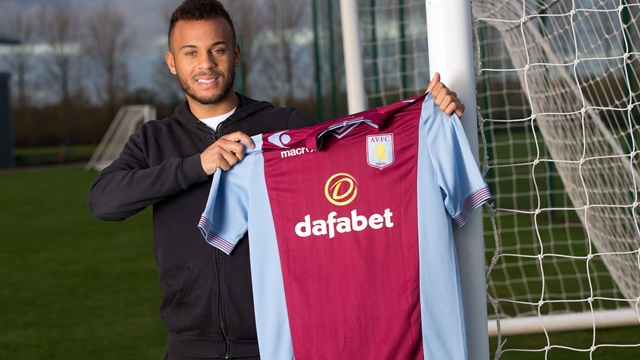 “It’s a fantastic opportunity for me to come here. Aston Villa is a fantastic club with a massive fanbase and a great history,” the defender told the club’s website.

“To get this chance to come here and play some games will be a really good step for me.

“I’ve had to adjust many times in my career having played under several managers, so I know I can settle in here quickly and I’m looking forward to being able to contribute to the team.

“Knowing some of the lads here, too, such as Fabian Delph, Marc Albrighton and a few others will really help, too, and I couldn’t be more looking forward to playing my part here.”