In his back-breaking pursuit of perfection, Olympic cycling great Chris Hoy forged the template that enabled Britain to become the dominant global force in the sport.

The 37-year-old Scot, who announced his retirement on Thursday, bows out as his country’s greatest ever Olympian and the most decorated Olympic cyclist of all time.

A silver-medallist in the team sprint at the Sydney Games in 2000, he tasted Olympic gold for the first time in the 1km track time-trial in Athens four years later.

But it was in Beijing in 2008 that he established his reputation, streaking to victory at the Laoshan velodrome in the team sprint, the sprint and the keirin to help fire Great Britain to the top of the cycling medals table for the first time in 88 years.

Prevented from defending his sprint title in London last year after Jason Kenny was picked ahead of him, he nonetheless held on to his crown in both the team sprint and the keirin to take his personal haul of Olympic medals to six golds and one silver as the hosts’ cyclists dominated once again.

The sustained success of British Cycling over the last six years has exasperated and perplexed their rivals, and in the thunder-thighed Hoy, their painstakingly meticulous approach took human form.

Already an immensely motivated competitor, Hoy found in performance director Dave Brailsford a kindred spirit who nourished and encouraged his appetite for finding the ‘marginal gains’ that became the team’s obsession.

For Hoy, it meant hour upon thankless hour in the gym and on the velodrome track, the legacy of which he exhibits not just in the medals around his neck, but also the extraordinary 27-inch (69-cm) girth of each of his thighs.

“It’s all of it – the science, the training, the coaches, but most of all, we point the mirror at ourselves and ask: ‘How can we get better?'”

Hoy had no idea of the sacrifices, and glory, that lay ahead when he first took to the saddle at the age of six, inspired by the cycling scenes in the blockbuster 1982 film, ‘E.T., the Extra-Terrestrial’.

Initially a BMX racer, Hoy reached number nine in the world ranking before turning to the track.

He first tasted major international success at the 1999 World Championships, when he claimed silver in the team sprint.

Three years later, in Copenhagen, he became a double world champion, prevailing in the team sprint and taking victory in the individual time-trial by a margin of just one-thousandth of a second. He was to amass nine more world titles in the years that followed.

His exploits in Beijing earned him a knighthood from Queen Elizabeth II and he cemented his legacy in London, sharing a memorable trackside embrace with Steve Redgrave after surpassing the British rowing legend’s tally of five gold medals with victory in the keirin.

He had expressed hope of prolonging his career until the 2014 Commonwealth Games in Glasgow, which will take place at a velodrome that bears his name, but he was forced to accept that the years of toil had taken too great a toll.

“To have a home Commonwealth Games on the back of a home Olympic Games, not many riders have that chance, so I’m certainly not lacking motivation about making it to the Games,” he said last November.

“It’s about whether my body can hold on.”

Ultimately, it could not, but with plans afoot to launch his own brand of bicycles, Hoy has already begun to prepare for life after cycling. 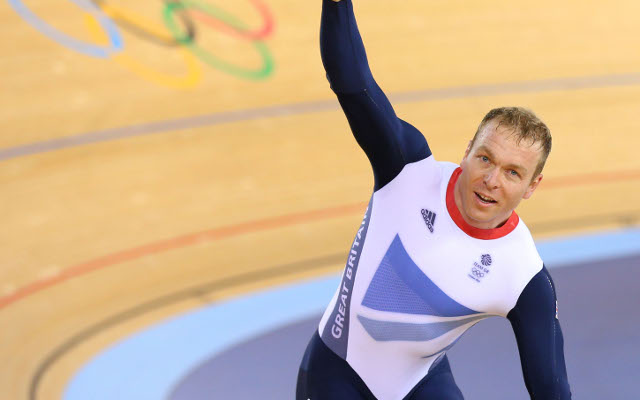