Glamorgan put themselves in control in south Wales as Australian all-rounder Jim Allenby hit an unbeaten 71 to top score for the hosts.

Gareth Andrew and Alan Richardson did take three wickets apiece for Worcestershire and it looked a little more hopeful for the away side when they had the Welsh team at 152-6.

Yet Allenby’s knock pushed the home side on whilst Ben Wright (40) and Marcus North (48) also chipped in with respectable totals.

Graham Wagg was the last man to fall in the Welsh capital as Allenby and Dean Cosker finished at the crease with their side in control going into day three, starting at 11.00 BST today.

The home side ensured it was a competitive game as half-centuries from Ramnaresh Sarwan and Matthew Boyce gave Leicestershire a solid start.

Opener Niall O’Brien also made 63 as the hosts chased the 406 runs set by Kent on day one, whilst Edmund Eckersley chipped in with 48.

Calum Haggett was the bowler on form for the away side as he claimed the top three wickets whilst conceding 57 runs, but Sarwan and Boyce put on 95 between them to take the home team from a modest 155-4 to 250-5.

Darren Stevens dismissed the West Indian with the last ball of the day with all to play for when the morning session starts at 11.00 BST today.

Resuming on 153-5 Northants took the game to their visitors as the tail-end made it look like the home side’s batting order was back-to-front.

Graham Napier built on his impressive first day for Essex by taking three wickets and reducing the hosts to 171-8.

Yet No.10 batsman Steven Crook shared century stands with David Willey and No.11 Trent Copeland to take the score to just under 400.

Seamer Crook finished on 88 not-out whilst Willey and Copeland also both hit half-centuries with 76 and 70 respectively.

Essex captain James Foster threw all his bowling options at the tail-end before Copeland was eventually the last man out for Tymal Mills’ only wicket of the day.

The away side will resume day three chasing Northant’s total on 94-2 at 11.00 BST today. 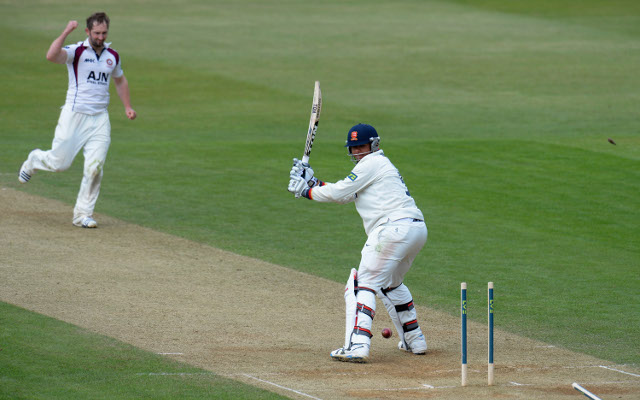