A brace from the Barcelona forward was enough to see Argentina through.

Lionel Messi scored twice as Argentina booked their place at the World Cup with a 5-2 thrashing of Paraguay on Tuesday.

Argentina captain Messi struck a penalty in each half as the South American giants made sure of their place at next year’s finals in Brazil in emphatic fashion.

The Argentines – missing four of their first-choice XI through suspension – had only needed a point in the Paraguayan capital to be certain of qualification.

But Alejandro Sabella’s side demonstrated why they are likely to be regarded as one of the teams to beat in Brazil by tearing into the home team from the whistle.

Messi fired them ahead from the penalty spot on 12 minutes only for Paraguay to equalise through Jose Nunez six minutes later.

Argentina earned a second penalty moments later when Salustiano Candia was harshly adjudged to have fouled Messi in the area.

Messi duly dusted himself down and blasted in his second goal of the night to make it 4-1.

Paraguay veteran Roque Santa Cruz struck a late consolation goal for the 2010 World Cup quarter-finalists but Maxi Rodriguez hit back for Argentina in the dying minutes to make it 5-2. 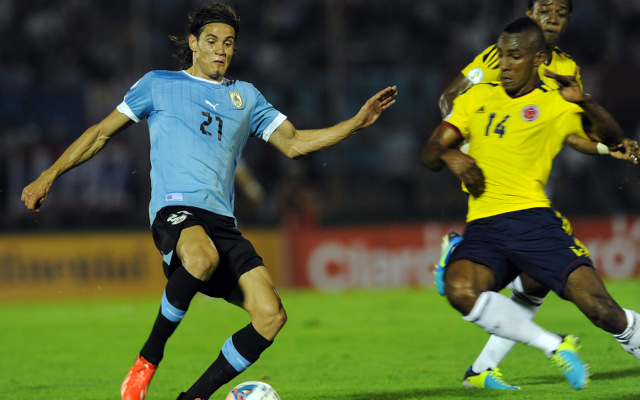 The Colombians had needed only a point to be sure of clinching their first World Cup qualification since 1998 and for long periods looked more than capable of claiming the result they needed.

But Uruguay broke the deadlock 13 minutes from time.

A superb curling cross from Maxi Pereira was met by Cavani, who guided his header expertly past Colombian keeper David Ospina to make it 1-0.

Moments later Gaston Ramirez carved out some space inside the area and cut back to find Stuani who coolly tucked the ball away to make it 2-0.

It was a third consecutive victory for Uruguay which left them level on 22 points with fourth placed Ecuador, who drew 1-1 with Bolivia earlier Tuesday.

Colombia remain firmly on course to qualify however, requiring only a point from their final two fixtures to reach Brazil.

Uruguay (22 points) could still be mathematically overhauled by sixth placed Venezuela (19 points), who kept their faint hopes alive with a 3-2 win over Peru, but it would require an unlikely sequence of results for the Uruguayans to be denied either automatic qualification or a play-off place against Asian minnows Jordan.

Arsenal told to cough up £15m for World Cup stopper