Cleveland Browns quarterback Johnny Manziel continues to be unable to avoid the spotlight wherever he goes, and this time it involved a heckling fan.

An 18-year-old reportedly badgered the quarterback for a long time, asking for his autograph, and Manziel refused to give it to him.

This incident took place at a hotel pool, which was near the AT&T Nelson golf tournament that Manziel had attended.

Manziel threw a water bottle at the heckler, which was 32 ounces. The bottle was nearly full, but a witness claims that the bottle hit a brick wall.

The Browns have caught wind of this incident, but they immediately shrugged it off and dismissed at as Manziel having to ignore an annoying fan, and it has also been reported that the fan grabbed his arm.

There has also been no evidence that he was drinking alcohol at the time.

Although this incident does not seem to be Manziel’s fault, he has a lot of ground to make up to have a chance at starting after a disastrous rookie season with the Browns.

Manziel also angered the team with his partying and later checked into rehab, and he will look to prove that he did in fact deserve to be drafted in the first round. 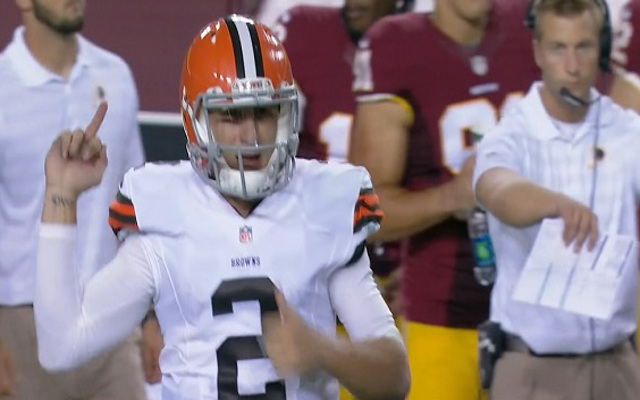