One of the most dominant middle linebacker hangs up his cleats after failing to find a new team.

Brian Urlacher announced on Wednesday that he would retire from American Football via his twitter account, ending one of the most dominating careers in recent NFL history. 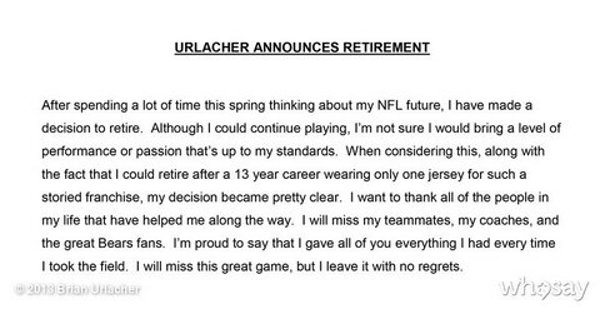 The Bears linebacker became one of the most feared and ruthless linebackers to play the game for the last 20 years, and spent his entire 13 year career with the Chicago franchise.

Urlacher was invited to eight Pro Bowls and named to five All-Pro teams, and had a Super Bowl appearance in 2006.

The 34-year old was released from the team this off-season, with the organisation looking to bring in younger talent in their defensive unit, looking to help see their team grow into an NFC contender.

While a place in the Hall of Fame is already a foregone conclusion, where he could be inducted in the same year as Ray Lewis, it is not clear where his future lies after playing, with a career in coaching his strongest option.

Fall-out from the Chicago Bears split with Brian Urlacher continues

Report: Minnesota Vikings are not interested in signing Brian Urlacher