Buffalo Bills offensive coordinator Greg Roman said QB EJ Manuel will get a chance to compete for the starting job and that his issues with the old coaching staff won’t be held against him.

At an introductory press conference for the Bills new coordinators on Tuesday, Roman said that they will evaluate all of Manuel’s skills and make a decision afterwards whether to have him compete for the starting job.

“I think both of them possess skills to play the position,” Roman said. “I think projecting this or thinking that, I think we’re really just going to focus on rolling the balls out on the field and getting our hands on them and working with them and going from there. Everything else really at this point is water-cooler talk.”

Manuel, who the Bills drafted No. 16 overall in the 2013 draft, struggled in his first two seasons under former head coach Doug Marrone. After having a lackluster rookie season, Manuel struggled mightily in 2014, going 2-2 before being benched for the rest of the year in favor of veteran Kyle Orton.

“I’m not going to get in to specifics,” Roman added. “I definitely think he’s done some very good things and displayed some good traits. I’d say we just have to get his level of consistency a little bit greater.

As Manuel rode the bench, Orton went 7-5 as a starter to finish the Bills season with a 9-7 record, their first winning season since 2004. After the 2014 season, however, Orton retired and head coach Doug Marrone opted out of his contract with the Bills, moving to the Jacksonville Jaguars to be an offensive assistant. The Bills hired former New York Jets head coach Rex Ryan as Marrone’s replacement, and Ryan, in turn, hired Greg Roman – formerly from the San Francisco 49ers – and former Jets QBs coach David Lee.

As of now, the only QBs the Bills have under contract are Manuel and Jeff Tuel, who started one game in 2013 when Manuel was injured and has appeared in only two games in his NFL career. 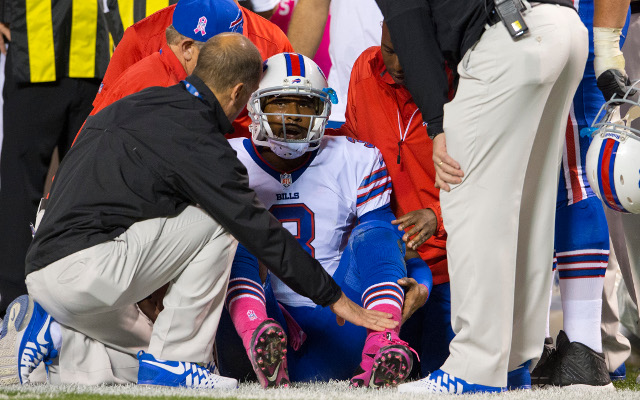