The victory is the Australian’s second in as many weeks, shooting him up the rankings.

Australian Brett Rumford romped to his second title in as many weeks at the Volvo China Open on Sunday in a tournament where China’s teen golf stars staked a claim on future trophies.

Rumford swept to victory with a four-under-par 68 in the final round, winning by four shots to take the 20 million yuan (U.S. $3.2 million) prize at at Tianjin Binhai Lake Golf Club.

It followed his win at the Ballantine’s Championship in Korea last week capping a remarkable fortnight that has seen him soar up the world rankings from 253 to the mid 80s.

He finished at 16 under par, with Finland’s Mikko Ilonen (71) in second place and Frenchman Victor Dubuisson (68) third.

“It’s surreal. I’m more than pleased, but it’s not my doing completely – I have a great team around me,” Rumford said.

Rumford started the day a shot ahead of playing partner Ilonen and they battled it out until the tournament was effectively settled in a three-hole stretch starting at the 12th.

Rumford made three consecutive birdies while Ilonen had a pair of bogeys, leaving him resigned to second place.

“Mikko certainly put the pressure on me through the turn there, and obviously he was driving well, but it’s amazing this game, how quickly it can turn,” Rumford said.

The relative ease of Rumford’s win could not have contrasted more with his experience in Korea, when he broke a near six-year victory drought only after enduring a nail-biting three-way play-off.

Chinese teenager Dou Zecheng put in another credible effort with a 73 that saw him finish the tournament in the middle of the field at one under par — the same as defending champion Branden Grace.

The 16-year-old amateur qualifier, the youngest player ever to make the cut in the tournament’s 19-year-history, immediately set his sights on even greater glory.

“I want more – I want to play in Majors,” he said, three weeks after 14-year-old compatriot Guan Tianlang stunned the golf world by making the cut at the U.S. Masters.

On Thursday another qualifier, China’s 12-year-old Ye Wocheng, became the youngest player ever to start a European Tour or OneAsia event. Ye missed the cut by 14 after shooting a pair of 79s.

Scores after round three of the Volvo China Open 2013: 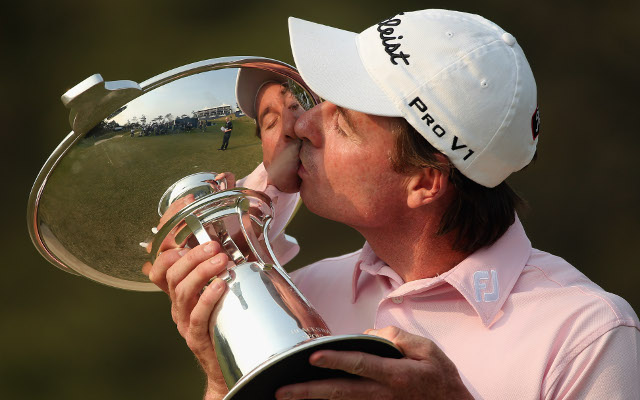