Australia’s Brett Rumford survived a late wobble to win the Ballantine’s Championship in dramatic style on Sunday, hitting an eagle on the first extra hole to seal the win.

Rumford blew a two-shot lead on the last two holes of regulation, double-bogeying the 17th and missing the fairway on the 18th before settling for par, leaving him tied at 11-under with Marcus Fraser and Peter Whiteford.

But Rumford recovered his poise on the first extra hole, the par-five 18th, hitting a much better tee shot and landing his second shot just a few feet above the hole before securing a fourth European Tour title.

Scotland’s Whiteford, who had missed a relatively short birdie putt on the 18th to win in regulation at the par-72 Blackstone Golf Club in Icheon, South Korea, and Australia’s Fraser both birdied the first extra hole.

Rumford started the final round in blistering form, picking up where he left off on Saturday, when he hit five consecutive birdies at the end of the third round.

Wielding a hot putter, the Australian started round four with two birdies and closed the front nine with four birdies in a row to make the turn in 30.

He hit his first bogey of the day on the 13th but bounced back with a birdie on the 14th and appeared to be in control before the driver failed him on the 17th and 18th.

Rumford thanked his coach, Pete Cowen, for helping him fix problems with his driver before the play-off.

“I left a few drives right — it wasn’t just the last two drives, it was the whole back nine I was feeling stuck and a little bit trapped,” Rumford said.

“I had a quick word with Pete and hit five or six balls off the first tee (while waiting for the play-off) and it obviously did the trick.”

Rumford choked back tears as he thanked his wife, Sally, for her support. The win, his fourth on the European Tour and his first since 2007, came one day before her birthday.

“It was mixed emotions coming home and I’m really lost for words at the moment but there are a lot of people I need to thank, starting with my wife Sally,” Rumford said.

“It’s been pretty hard golf-wise and raising twins is not easy. She’s an amazing lady and she’s a great support to me and that’s why I’m standing here today.

“It was an absolute roller-coaster ride of emotions out there this afternoon. Obviously, my last five holes yesterday and front nine today got me in a great position to take this tournament.”

Noren, the overnight leader by one shot, stumbled to a final-round 74. He took a penalty stroke on the second when his ball moved as he addressed his par putt and double-bogeyed the 10th and 13th to drop out of contention.

World number seven Louis Oosthuizen shot a 69 to finish at eight-under for the tournament, co-sanctioned by the Asian Tour. 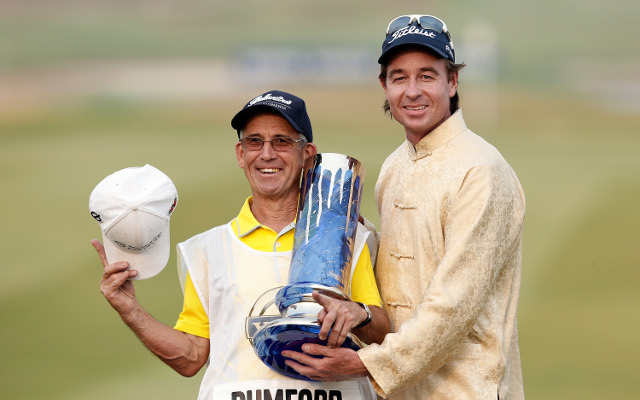