#MUFC rejected Chelsea’s opening bid for Wayne Rooney last night. They insist he is not for sale.

Chelsea’s opening offer for Wayne Rooney was cash plus a player. #MUFC told them to shove it.

Chelsea offered David Luiz or Juan Mata plus £10m. United flaty rejected it. Chelsea will come back with another bid, however.

Man United have rejected an astonishing player-plus-cash offer from Chelsea for unsettled Wayne Rooney, according to BBC journalist Ben Smith.

The same story has also been covered by the Daily Mail.

The Blues reportedly offered United either David Luiz or Juan Mata plus £10m but the offer was rejected by the Red Devils. 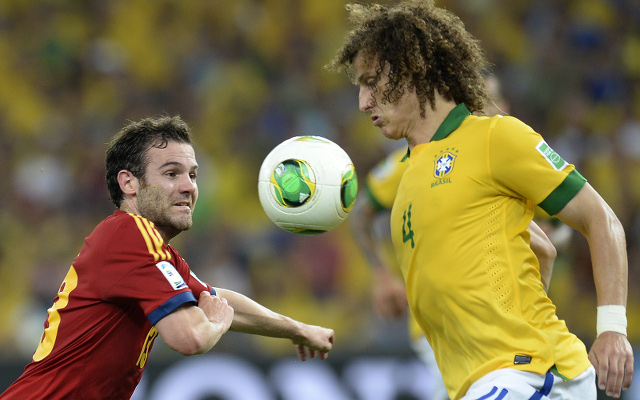 Rooney was last night reported to be ‘angry and confused’ by comments made by new United boss David Moyes and the England striker, 27, appears increasingly likely to leave the club this summer.

More surprising than Chelsea’s interest in Rooney is the willingness of head-coach Jose Mourinho to lose either Mata or Luiz, both of whom were among the Blues’ best performers last season.

Luiz, a reported £40m target for Barcelona, was hugely impressive in Brazil’s recent triumph at the Confederations Cup, while Mata was named the club’s player of the year after racking up 16 goals and 20 assists last season.

The news that Mou is willing to offload the duo will surely alert some of Europe’s biggest teams, while United’s refusal to accept such a seemingly generous offer may raise eyebrows among some of their supporters.