Aaron Ramsey is Arsenal’s no.1 CM with an 82 rating. Jack Wilshere and Mikel Arteta are both on 81, but the Englishman’s superior physical stats see him edge out the club captain.

Wilshere scores higher than Arteta in the following five categories:

CAM Ozil is Arsenal’s best player on the game.

The German’s 87 rating is slightly better than that of LW Sanchez, who is not far behind on 86.

Attacking midfield is clearly where Arsenal are at their best. Cazorla – 85 – is their third best player according to FIFA 16.

Although his overall rating is only 81, Theo Walcott will probably get into many managers’ teams.

The England international is the fastest player on the entire game, but he’s not good enough to keep out Sanchez, Ozil or Cazorla because of his inferiority in other areas, such as passing and dribbing.

With Alexis in attacking midfield, it is pretty much a straight shoot-out between Giroud and Danny Welbeck for the honour of leading Arsenal’s FIFA attack. 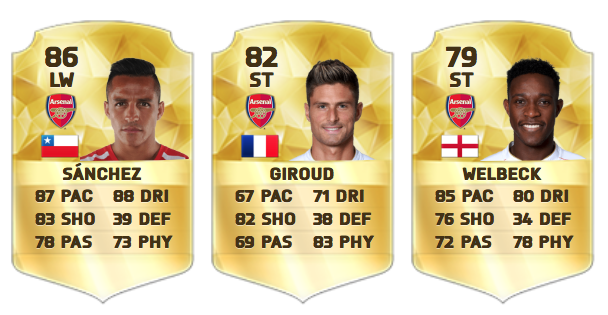