Many Arsenal fans have different opinions when it comes to which players form their club’s best starting XI.

Well, according to the ratings on FIFA 16, this is Arsene Wenger’s best team in a 4-2-3-1 formation…

Cech is streets ahead of David Ospina. The former Chelsea stopper boasts an overall score of 85, compared to his rival’s 78.

Centre-backs – Per Mertesacker and Laurent Koscielny

Unsurprisingly, Mertesacker and Koscielny – both of whom have an 83 rating – are Arsenal’s best centre-back pairing. Back-up Gabriel Paulista is only 78.

Debuchy is no longer Arsenal’s first-choice right-back in the real world, having been replaced by Spanish speedster Hector Bellerin.

However, the former Newcastle defender is still much better than Bellerin on FIFA.

Bellerin’s overall rating is a modest 74, while Debuchy is way ahead on 80.

At left-back, Gibbs and Nacho Monreal are both also on 80 overall.

Gibbs will probably pip Gibbs for most virtual managers though, because the Englishman has a superior pace score – 81, compared to Monreal’s 77. 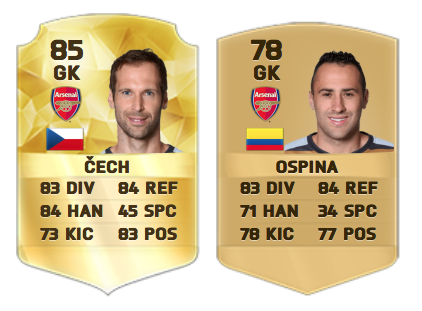