GM believes there is still a chance Gonzalez will play one more year.At the start of the season, Tony Gonzalez stated that there was ’95 percent chance’ it would also be his last.

Check in to San Francisco 49ers at Jacksonville Jaguars

At 36, he believes he can no longer perform at a high level, but coming off the back of his best season yet, many still thinks he has what it takes to compete with the best.

However, Falcons GM Thomas Dimitroff he thinks the figure is nearer 50 percent, rather than the 95 Gonzalez has continually stated.

“Tony has done so much for us on and off the field and I don’t believe, not stating that he would be lying to anyone, but I don’t believe the 95 percent,” Dimitroff said Thursday via NFL.com.

“Obviously (head coach) Mike Smith has had discussions with him. We’re all in a good place. Ultimately it’s up to Tony to decide if he wants to come back and potentially catch 100 balls again.

“I think it’s one of those situations that Tony was so effective for us down the stretch and I can’t imagine that his appetite wasn’t sort of whet from his contributions in the playoffs.”

The ‘future hall of famer’ has done everything in his career, apart from win a Superbowl, and that may just be the deciding factor in his return.

The Falcons were just four yards away from making the Superbowl and Gonzalez may think that there is every chance that Atlanta can bridge that gap and feature in it next season.

After trading a second round pick in 2010 for the former Kansas City Chiefs tight end, Gonzalez has been Matt Ryan’s most reliable target in the air, and has gone on to lead all tight ends in touchdown receptions with 103.

Sooner or later there will be a future in Atlanta without the six foot five monster, but while he has that urge to keep playing, the Falcons will always hold out for one more year. 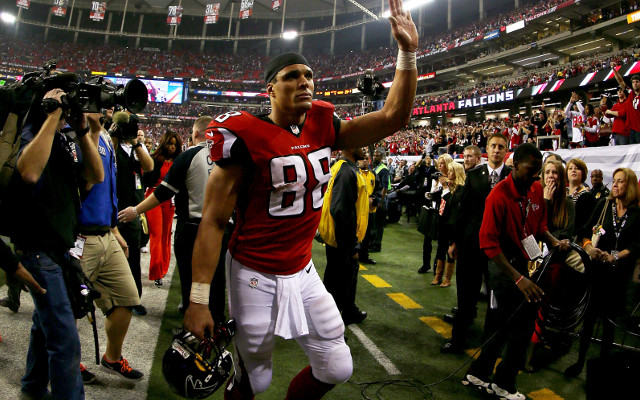 Tony Gonzalez is open to NFL return on his terms