Cesc Fabregas announced himself at Chelsea on Monday with a Man of the Match performance against Burnley in a 3-1 Premier League victory.

Yet the midfielder’s return to England has left a bitter taste at Arsenal with Fabregas previously spending eight years with the club and becoming captain, before joining Barcelona in 2011.

Current Gunners striker Yaya Sanogo clearly agrees with the fans and mocked the Spaniard by re-tweeting his now famous ‘Once a gunner, always a gunner’ comment. 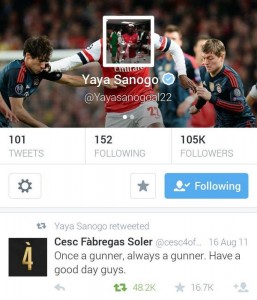