Zouma has emerged as a target for the Gunners.

Saint-Etienne starlet Kurt Zouma has been linked with several clubs this summer, including Chelsea, Anzhi Makhachkala and Borussia Dortmund and is now targeted by Arsenal, according to Le 10 Sport. 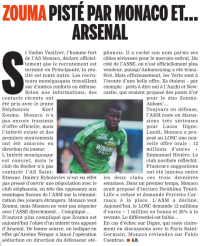 The French publication also links AS Monaco with a move for the 18-year-old and after having an impressive year for both club and country it’s easy to see why.

Zouma helped St Etienne to fifth in the Ligue 1 table with some fine performances for the side, whilst as part of the France under-20 team, the centre-back guided the nation to World Cup victory in Turkey this month.

The teenager played five matches at the tournament – even managing to score a goal – to add to the 22 appearances at club level in both the league and cup competitions in 2012/13.

Having progressed through the St Etienne youth system and then breaking into the first team in 2011, the prestigious talent of Zouma has made the defender a really attractive prospect for several top sides.

The only concern of the Frenchman is whether he will get as many opportunities in the starting XI were the centre-back to leave the Stade Geoffroy-Guichard for a bigger club.

The Gunners would find the signature of Zouma an attractive prospect though, with the youngster fitting the bill with manager Arsene Wenger for age and nationality, and with the starlet having the capability to play at right-back – an adequate cover player for Bacary Sagna.

As yet Wenger has only brought one new face to north London and that is Auxerre striker Yaya Sanogo (another star from the under-20 World Cup) on a free transfer.