Gunners boss could swap the Emirates for the Parc des Princes next summer.

Arsene Wenger is seriously considering quitting Arsenal to take over at Ligue 1 giants PSG, according to a source close to the Frenchman.

PSG owner Nasser Al-Khelaifi is known to admire Wenger and was reportedly keen for the Gunners boss to replace outgoing head-coach Carlo Ancelotti this summer.

The 63-year-old has one year remaining on his current deal at the Emirates Stadium and is thought to have spurned the Parisiens’ advances in order to continue his project at Arsenal.

But PSG’s appointment of former France boss Laurent Blanc as head-coach on just a one-year deal has sparked further speculation that Wenger could walk away from Arsenal to take over at the Parc des Princes next summer.

And a source close to the former Monaco manager has revealed he is seriously considering the switch, after eight trophyless seasons in north London.

“He doesn’t need to repeat himself, everyone knows his stance on the matter. He hasn’t refused the PSG job this year, because he is in no position to do so, still being under contract at Arsenal. In a couple of months, the situation will be different,” a source close to Wenger told French source Le10 Sport. 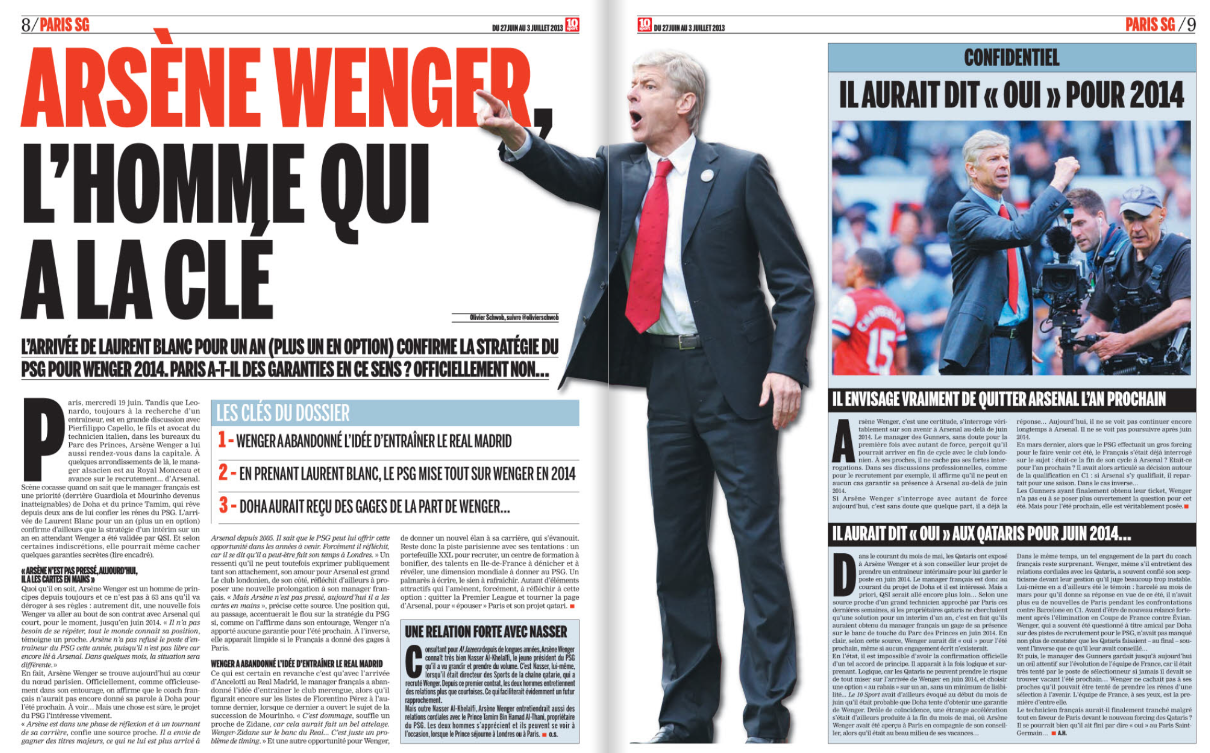 “Arsene has reached a time in his career where he needs to reflect. He wants to win major titles, which hasn’t happened at Arsenal since 2005. He knows that PSG can offer him this opportunity in the years to come. Of course he’s thinking about it, because he knows he might have done everything he can in London.”

Wenger been a pundit on Al-Khelaifi’s TV channel , Al-Jazeera Sports, for many years after the Qatari reportedly personally asked him to take on the role.

In addition, Le10Sport claims a source close to a manger who was previously approached by PSG – possibly Andre Villas-Boas or Fabio Capello – said that Wenger has already said yes to managing the French champions from summer 2014.

Image via the always excellent SportWitness.