Questions linger about the health of NFL side’s star quarterback.

Arizona Cardinals quarterback Carson Palmer was limited in practice for the second straight day because of a right elbow injury suffered early in Sunday’s 24-21 loss to the Philadelphia Eagles.

The injury happened when Palmer was strip-sacked by Philadelphia’s Trent Cole on the Cardinals’ third play of the game, according to media reports. Palmer went on to throw for 302 yards and two touchdowns. He also had two interceptions, both of which were slightly underthrown.

During the open portion of Thursday’s practice, Palmer went through quarterback drills but had limited participation in throwing exercises. He wore a black sleeve over his right elbow.

He led the first team during practice, however, taking occasional plays off.

In a replay of the strip-sack, Cole got to the ball when Palmer appeared to be in a full windup. Palmer also appeared to walk off with his right arm cocked at a 90-degree angle while his left arm hung normally by his side.

Coach Bruce Arians and Palmer met with the media before Wednesday’s practice and before the injury report was released. 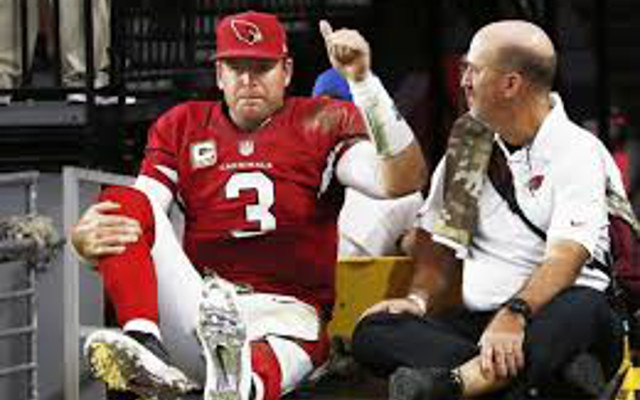