West Indies just about got over the line in a low-scoring thriller at Nagpur on Friday, knocking off 123 with two balls and three wickets to spare against South Africa.

Defending their modest target, the Proteas got Chris Gayle second ball. West Indies regrouped and seemed in control, but were pegged superbly. Imran Tahir led the way for South Africa, who fielded brilliantly, with 2-13 off four overs.

The Windies went into the final over needing nine to win. Carlos Brathwaite finally got hold of one off Kagisho Rabada, and this six over mid-wicket pretty much settled the game.

This is a fantastic result for England, who will join the West Indies in the semi-finals of the T20 World Cup if they beat Sri Lanka on Saturday.

South Africa still have hope. They need Sri Lanka to beat England, and then beat Sri Lanka. If that happens, it will come down to net run rate!

GAYLE THE BOSS…WITH THE BALL

We know Chris Gayle is the ‘Universe Boss’ with bat in hand, but it was his bowling which tore apart South Africa in today’s World T20 clash.

Darren Sammy surprisingly turned to the opening batsman and he took two wickets. He had Rilee Roussow caught for a duck, and then produced a snorter which turned and left David Miller bamboozled.

Gayle was ice cool as usual with his celebration!

South Africa only managed 122-8, with Quinton de Kock top scoring with 47 at the top of the order, but he lacked support aside from 28 from David Wiese.

It went badly from the third ball for the Proteas as Hashim Amla was run out. Faf du Plessis and AB de Villiers also failed to fire. 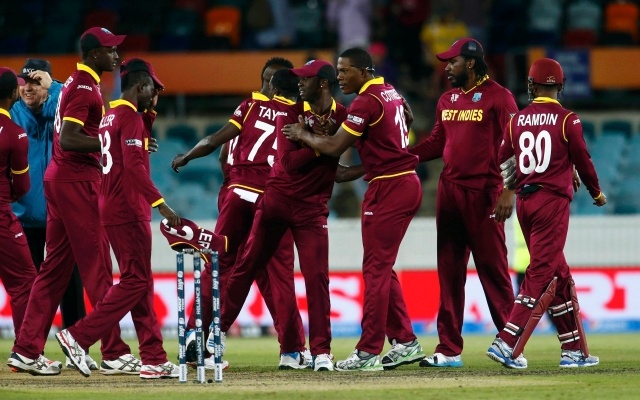 Video: South Africa in control after Day 4 with Hashim Amla leading by example