Oldham’s Matt Smith caused more FA Cup drama as the League One giant-killers snatched a late equaliser to hold Everton to a 2-2 draw in the fifth round on Saturday.

Smith had scored twice in Oldham’s surprise win over Liverpool in the previous round and he came off the bench to frustrate the blue half of Merseyside in a thrilling tie at Boundary Park.

Jordan Obita shocked Everton with the opening goal early in the first half, yet Everton looked on course for the quarter-finals when Victor Anichebe netted the equaliser and Phil Jagielka headed the Premier League team in front soon after half-time.

But there was a sting in the tale for David Moyes’ men as Smith, a former shelf stacker in a supermarket, headed the equaliser with virtually the last touch of the game to set up a replay at Goodison Park.

Since their win over Liverpool, Oldham had dropped into the League One relegation zone and dismissed boss Paul Dickov, leaving Tony Philliskirk in charge on a caretaker basis, but their ability to trouble more illustrious opponents remains intact.

Everton were at full strength and England defender Leighton Baines went close to opening the scoring early on when his free-kick clipped off former Everton player Jose Baxter’s head and flashed just wide.

Yet just hours after Arsenal’s shock defeat against Blackburn, another upset was on the cards as Obita, a 19-year-old making his first appearance in the FA Cup, threatened to write his own chapter in the competition’s rich history.

Lee Croft broke clear down the left in the 13th minute and drilled a low cross to the far post, where on-loan Reading forward Obita was just onside as he escaped his marker and slotted home for his first Oldham goal.

However, Oldham’s advantage was short-lived. In the 24th minute, Nikica Jelavic flicked on a long ball and Nigerian striker Anichebe showed great strength to power past Jean-Yves M’voto and hammer his shot past the exposed Dean Bouzanis.

Obita almost produced the perfect response to that setback as the teenager’s shot from the left side of the penalty area was pushed onto the far post by a fingertip save from Everton goalkeeper Tim Howard.

Moyes was forced to send on Kevin Mirallas in place of the injured Anichebe at half-time and the substitute made an immediate impact.

Mirallas whipped in a 48th minute corner that picked out Jagielka just six yards from goal and the England defender directed his header past Oldham goalkeeper Dean Bouzanis in emphatic fashion.

But Smith came on with half an hour remaining and, together with fellow substitute Robbie Simpson, he dragged the hosts back into the match.

Smith had a sight of goal when Simpson’s pass found him on the edge of the area, yet although his shot was well struck Howard plunged to his right to make a save.

Howard then denied Simpson with a terrific save as the Oldham midfielder fired goalwards from no more than eight yards out.

However, Howard’s heroics were in vain. Oldham got their reward in the last minute of stoppage-time thanks to Smith, who took advantage of confusion caused by Bouzanis, sent up for the last-gasp corner, to power home a towering header from close-range. 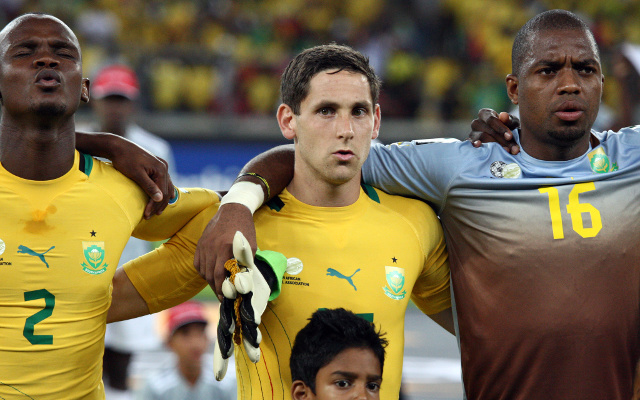