The Houston Rockets will not go away just yet, as they have taken home a victory in the Western Conference Finals after beating the Golden State Warriors, 128-115.

They had dominated the Warriors from start to finish, as they scored a whopping 45 points in the first quarter while holding the Warriors to 22.

The Rockets drilled three-pointers nonstop, but they slowed down a bit in the second quarter as the Warriors began to show signs of life.

However, their game was derailed severely as point guard and MVP Stephen Curry suffered a head contusion after falling hard on the floor.

He left the game and was attended to by team personnel, but the Warriors were able to make it a game again for their fallen hero.

The Rockets took a 69-59 lead at halftime, but the Warriors fell behind in the third quarter as the Rockets extended their lead to 22 points with about three minutes remaining.

The Warriors went on a 13-6 run to end the quarter though, and Curry was able to return to the court. His comeback was not all that triumphant though as he started off roughly, as seen by this uncharacteristic air ball.

In the fourth quarter, the Warriors continued to storm back as they went on an 11-3 run to start the quarter, and they trimmed the Rockets’ lead to seven points.

The Rockets subsequently went on a 10-0 run to hold off the Warriors, who were unable to score a single point for nearly four minutes.

Curry continued to catch fire though, as he scored eight more points in the fourth quarter.

This was to no avail though, as Harden was even better. He capped off his amazing performance with 17 points in the fourth quarter, including the dagger three-pointer.

The announcers were so floored by Harden’s sensational performance that they mistakenly thought it was Curry shooting the ball.

He nailed this one at the shot clock buzzer, and it came with 25 seconds left in the game.

Harden did a complete 180 from Game 3 as he looked like an MVP by scoring 45 points to go with nine rebounds and five assists.

Small forward Josh Smith made the start for the Rockets and shined from the field as he made 7-of-8 of his shots, although he struggled at the free-throw line by shooting 3-for-12.

For the Warriors, Curry scored 23 points on 7-of-18 shooting with 6-of-13 shooting from the three-point line, despite missing extended time due to his head injury.

Power forward Draymond Green fouled out, but he scored 21 points with 15 rebounds while shooting 9-for-14 from the field. He also added four assists and five blocked shots.

The Warriors will return home for Game 5, which will mark another opportunity to clinch the Western Conference title and a spot in the NBA Finals. 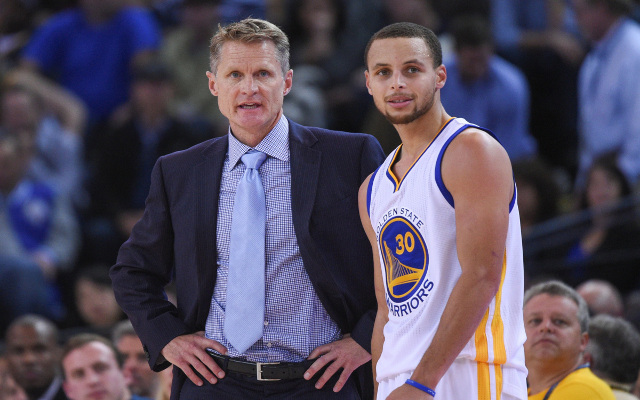