Michigan Wolverines head coach Jim Harbaugh had his happy face on (see above) as his team rallied late to tie the Indiana Hoosiers and then beat them in double-overtime, setting up a season finale against the reigning B1G champion Ohio State Buckeyes.

The Hoosiers led the game with only 3:50 remaining in the 4th quarter thanks to a long TD run by star RB Jordan Howard. But Harbaugh’s QB Jake Rudock – who would have a career day with 6 TDs and 440 passing yards – managed to tie it up and force overtime on the last play of regulation.

In overtime, Howard scored a lead-taking TD that forced Michigan to go for broke – and they managed to match with another Rudock TD.

In the a second overtime period the Wolverines made the key TD on a 25-yard pass from Rudock to Amara Darboh.

But the Hoosiers fell short of converting again, and the Michigan Wolverines managed to escape with a big 48-41 win to set up a big showdown with the reigning National Champion Ohio State Buckeyes on November 28. 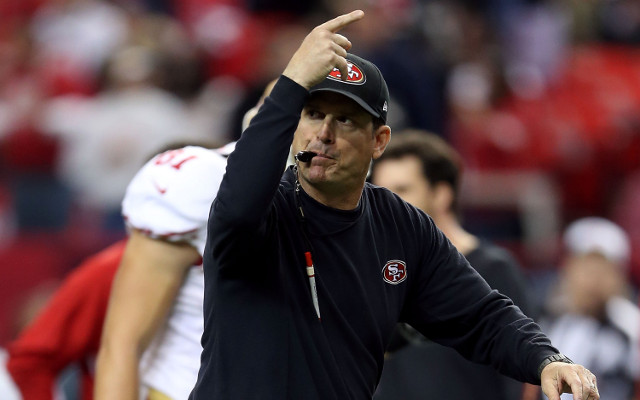