Absence of Hawks star Lance Franklin does not slow down competition leaders.

Despite the absence of star forward Lance Franklin due to a niggling injury, the Hawks did not miss a beat as Roughead continued his excellent season in front of goal. 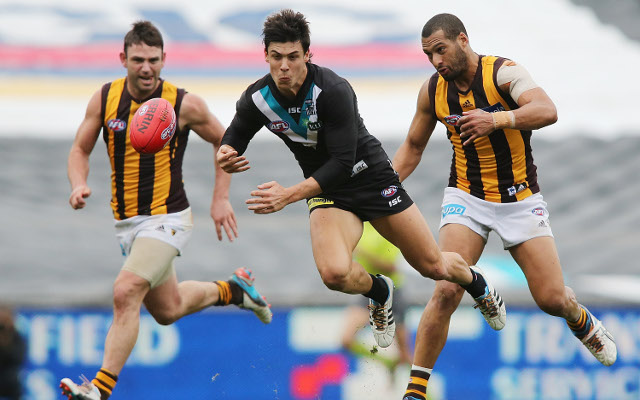 With the touring Hawks side leading by just 12 at the long break they opened up a game winning margin thanks in large part to Roughead.

The AFL’s leading goal-kicker this season bagged three of his five in the term as they outscored the Power six goals to two to open up a 37-point advantage at the last change.

Hawthorn coach Alastair Clarkson said his side knew they would not cruise victory against the Power on their home ground.

“it was a tough game. Port Adelaide are always tough to be at over here so we’re stoked with our effort,” Clarkson said.

“We took our chances in the first quarter which was really important, because you can’t just rely on one or two players to kick goals.”

When asked what the ailment was that kept Franklin out of the game, Clarkson said the conspiracy theories of a serious injury were wide of the mark.

“He just had a bit of swelling behind his knee. He was OK up until Tuesday when there was some stiffness that we thought would settle,” he said.

“From what I can gather, he’s not going to be a great concerns for next week, we’ll see how he goes.” 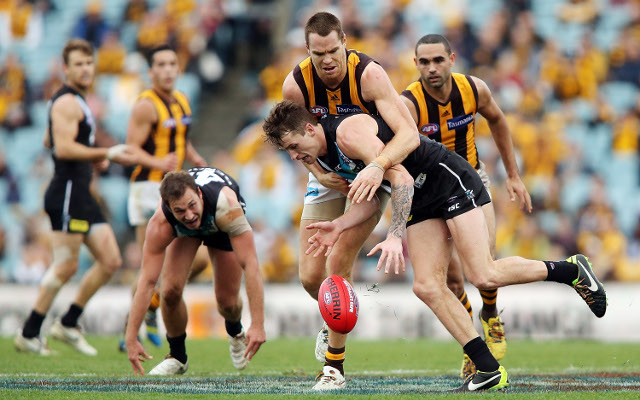 Hawthorn skipper Luke Hodge again led from the front and added his class where needed, and also formed a dangerous combination with Jordan Lewis.

However, Lewis will have a nervous wait to see if he is right to play against the Western Bulldogs next round, after being reported for striking Port’s Chad Winguard in the first quarter.

Winguard put the early altercation behind him to be one of his side’s best alongside Travis Boak, while Angus Monfries and Kade Neade did their best to keep their side in touch with a pair of goals each.

The Hawks host Western Bulldogs next Saturday in Tasmania with Ben Stratton an unlikely starter after being concussed – he ducked into a Wingard tackle and knocked himself out. 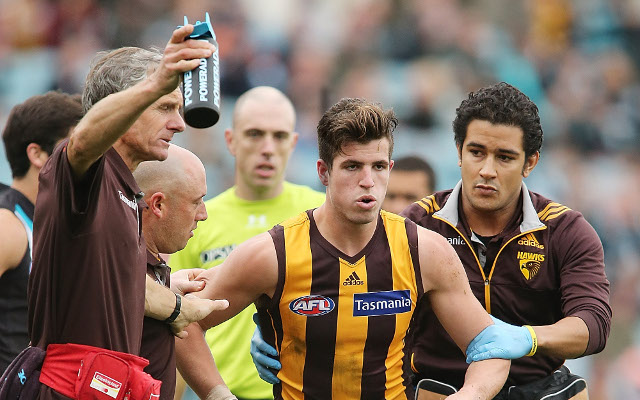 Port, scrapping to remain in the top eight with eight wins and seven losses, travel to play St Kilda next Saturday night in Melbourne.