“With Clint leaving the Club, it was time for an image change,” say Spurs on twitter.

With no meaningful football happening, the media are resorting to increasingly random and desperate stories to fill both the back-pages and the blogosphere.

Earlier this week, several newspapers – including, surprisingly, The Guardian – noted that Tottenham Hotspur had changed the background on their official twitter account to exclude Gareth Bale, who reportedly wants to leave the club for Real Madrid this summer.

Ignoring the fact that Bale remains plastered all over the club’s official Instagram account, the rags took the change to mean Bale was offski. Meanwhile, there was a perfectly logical reason why the background had been replaced – Clint Dempsey, who has just left Spurs for Seattle Sounders, occupied the other half: 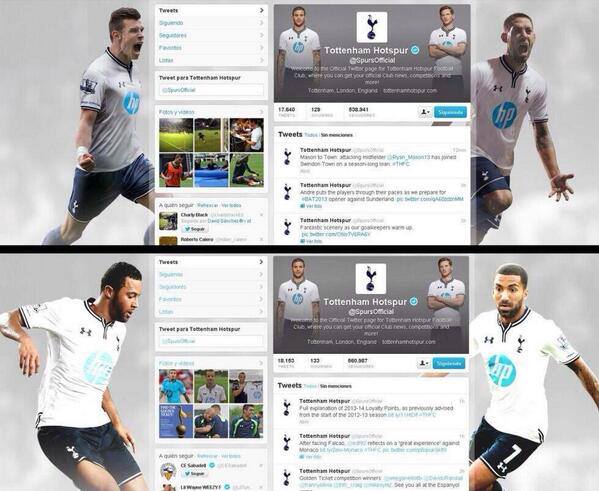 Arguably, the PR own-goal could have been prevented if the replacement background had contained Bale but the whole thing seems a little ridiculous.

And uncharacteristically, Spurs have decided to quell the speculation with a couple of tweets clarifying the reason for the change:

Changing our Twitter background seems to have created a bit of a frenzy. With Clint leaving the Club, it was time for an image change #THFC

Gareth was on that background too. Did anyone notice? We change our social media backgrounds regularly and feature all players. #THFC

We might change our Twitter background image again – hope nobody reads too much into it. WARNING: another change is coming! #THFC

Oh, how we long for the return of Premier League football.