With the north London club set to bring in a new front man at the end of the season, we take a closer look at the five candidates that manager Arsene Wenger is reportedly running his eye over. 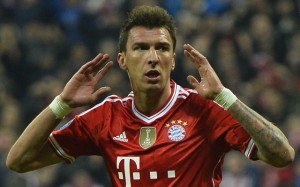 Reports over the course of the past few days in the British press have claimed that the Gunners have decided to shift their striking focus this summer away from prolific Atletico Madrid’s Diego Costa towards the under-rated Bayern Munich marksman.

One of the reasons that the north London club are said to be hopeful of being able to persuade the Croatia international to swap the Allianz Arena for the Emirates when the summer transfer window reopens is due to the arrival of deadly Borussia Dortmund striker Robert Lewandowski in Bavaria to seemingly take Mandzukic’s place up front at the Bundesliga champions next season.

And with it also understood that new Bayern boss Pep Guardiola is happy to let the Croat leave the club this summer, his Arsenal counterpart is understandably keen to lure Mandzukic to north London in what would be a major coup for the Frenchman.

Mandzukic has managed to score a hugely impressive 46 goals in total in his 83 matches in all competitions since arriving in Munich at the start of the previous campaign, while the attacker also has nine assists to his name in both the league and the UEFA Champions League League just in this campaign alone.