You could forgive Parramatta Eels coach Ricky Stuart for thinking the scoreboard at Allianz Stadium was part of an April Fool’s Day prank.

Records tumbled after the final siren, with the victory the biggest winning margin for the Roosters against Parramatta eclipsing the 43-2 score in 1972.

It was also the first time the Sydney team had cracked the half-century mark against the Eels since 1972, as they cruised to victory in the nine try romp.

As woeful as the Eels were, the Roosters were twice as good as they captalised on the glut of possession they enjoyed while also looking stable defensively, as they kept a side to nil for the second week in a row.

Sydney looked threatening every time they had the ball in the hands with 11 linebreaks for a total of 1432 running metres, more than 500 than Parramatta’s total.

The mind-boggling statistics from the game continued with the Eels missing a staggering 48 tackles.

“I didn’t expect it to be that much, but it was nice to see that score tonight,” Roosters coach Trent Robinson said.

Asked about if he will be giving Sonny Bill Williams more creative license with the ball in hand, the Roosters backed his star signing.

“We he was in union he played on both side of the park and we’ve talked about just letting him go, he said. 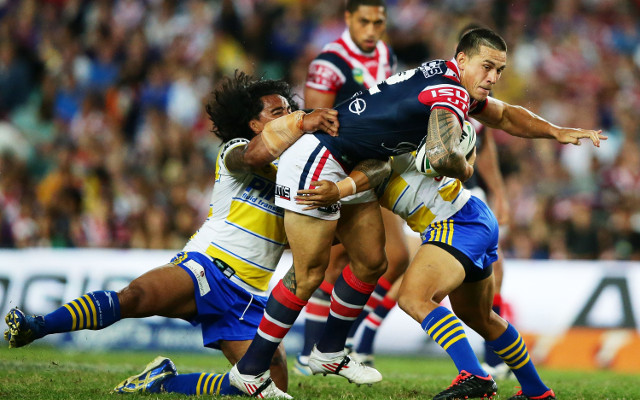 The avalanche of tries started when a  Mitchell Pearce bomb was spilt by Vai Toutai, with the Roosters reacting quickly to see prop Jared Waerea-Hargreaves touch down under the posts before Sonny Bill Williams scored from a grubber kick.

The Eels looked to build pressure to get themselves into the game but they failed to seriously threaten the Roosters line early.

Sydney’s forward laid an excellent platform for their side and their inside markers cut down the time Eels’ halfback Chris Sandow had on the ball, especially with his potentially dangerous kicking game.

Tuivasa-Sheck flew above Toutai, who was well out of position, to score his first career try to put the Roosters ahead by 16.

A repeat set saw the Roosters shift the ball well to their right edge again, with Tuivasa-Sheck doubling his career tally as the game became a blowout at 22-0 with 40 minutes remaining. 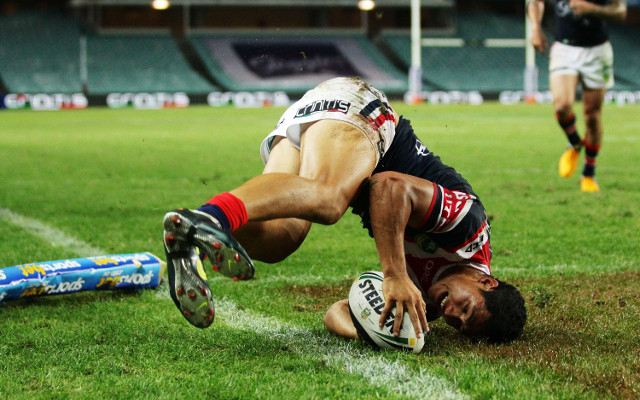 The Roosters had kept their last three opponents scoreless in the first half, the
last time that happened was in 2004 when Stuart was Roosters coach.

A bad pass by hooker Ben Roberts and a penalty in the next set of six compounded the problems of the Eels from the first 40 minutes with Michael Jennings scoring when he had no right to.

Despite being faced with three Eels defenders, the former Panthers centre barged his way over Ryan Morgan to score his first for the first time with his new club.

The Roosters gritty 8-0 win against the Broncos last round could not be diametrically opposed
as their performance against the Eels, as they showed off their attacking prowess along with still being defensively solid.

Just completing a set for the Eels was tough enough in the second half as their percentage plummeted and finished at 57.

After yet another Eels turnover, Sonny Bill Williams set up Tuivasa-Sheck for his hat-trick with a sensational cut-out pass to make the score 32-0.

Further tries to Daniel Mortimer, Bill Tupou and Boyd Cordner sealed the rout, with the only bad news out of the Roosters camp being Frank Paul Nuuausala, who failed to finish the game because of knee medial ligament  damage.