Ruben Loftus-Cheek will start his first ever game for Chelsea against Liverpool at Stamford Bridge later this afternoon.

With the Blues crowned Premier League champions last week it was expected Jose Mourinho might be slightly more liberal with his team selection and provide opportunities to more junior members of the squad.

The 19-year-old youth star hinted he would start in a now-deleted Facebook post, saying today is the ‘biggest day of my life so far #nothing to lose’ (pictured below). 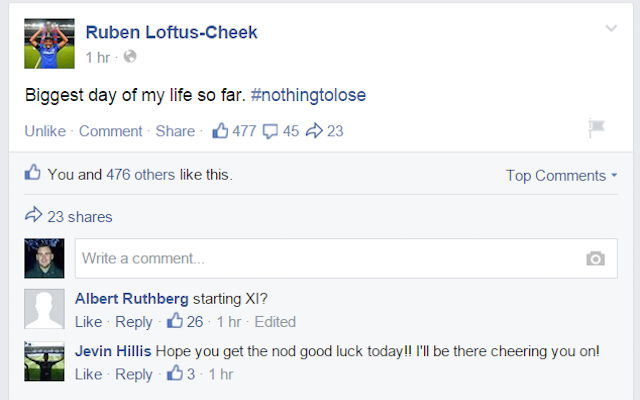 And Jose Mourinho has confirmed the news in his match-day programme notes ahead of the game’s kick-off at 4pm, according to Associated Press reporter Rob Harris.

My half brother ruben having his debut today against Liverpool! Wicked news! Enjoy it bro!!

Lotus-Cheek joined the Blues as an eight-year-old in 2004 and has made a number of first team appearances this season, notably in the Champions League, but this would be his first start for his boyhood club.

Liverpool meanwhile will likely not be so open with their team selection, their top four hopes hang by a thread and today is must win if they stand any chance of securing Champions League football next season.