Sydney Roosters forward Sonny Bill Williams scored two tires to help his side to its biggest win against the Canterbury Bulldogs since 1935.

A five-try second half saw the Roosters blow the Bulldogs off the field to cruise to a well-earned 38-0 victory at Allianz Stadium.

It was the fourth time in five games the Roosters had kept an opponent to nil, as their attack, again led by outstanding halves Mitchell Pearce and James Maloney pulled the strings.

Roosters coach Trent Robinson said after their upset loss at the hands of the Raiders last round, his side knew they needed to make a statement.

“Everyone was clear on what they needed to improve on and that came through tonight,” Robinson said,

“it was great having him (Williams) out there, but individuals don’t win premierships, so we’ve still got a long way to go.

When asked if he thought Maloney was ready to be considered for a NSW jersey, the Roosters leader did not place extra pressure on his new signing.

“I’ve been to an Origin game but thats’ as close as I got. I can;t really comment on what it takes to get there,” he said. 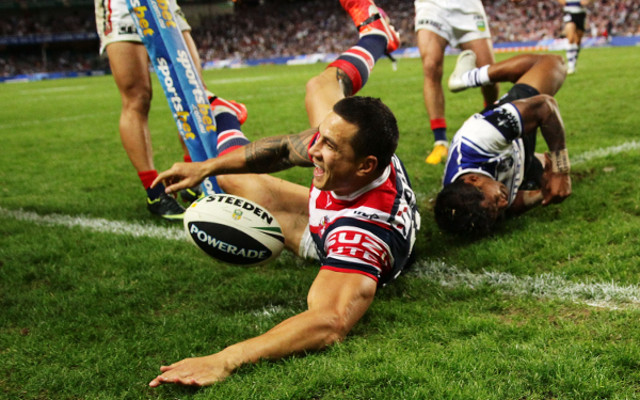 All of the hype leading up to the game surrounded Williams playing the club he walked out on in 2008 for the first time.

But it was all business for the man of the moment.

“I’ve been around lone enough to understand what it takes to get the best out of myself,” Williams said.

Despite the subplots leading up to the game a disappointing crowd was on hand, but those in attendance saw Williams set up the first try for Roger Tuivasa-Shec with the same cut-out pass he threw to put the winger across the line when playing Parramatta last round.

Maloney slotted the conversion and a penalty, soon after, from right in front of the posts after the Bulldogs were penalised for being in the tackle area too long. 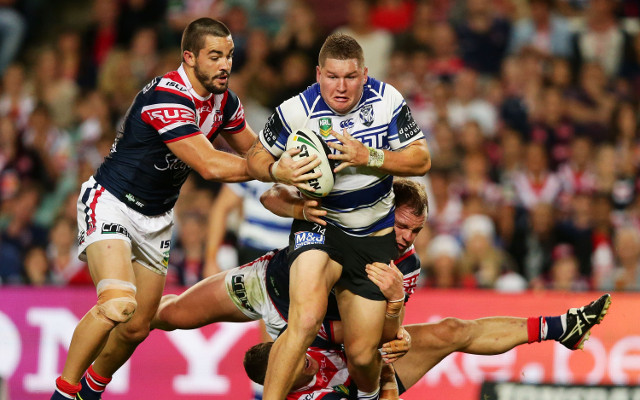 Sydney led by eight at half-time, but it was after the break when the scoring floodgates opened.

Williams scored the first of his tries in the 48th minutes when Pearce set up the damaging ball-runner to make it 14-0.

Roosters utility Daniel Mortimer continued to pile on the pain for the Bulldogs fans as he scored, before Williams second seeing the score blow out to 26-0 after 64 minutes.

Scores to Maloney and Michael Jennings added to the impressive win by the Roosters, while the Bulldogs look a long way from their 2012 minor premiership, having now slumped to 1-5 to start the year.

NRL injury news: Sonny Bill Williams out for a month with a fractured thumb