Alli, Dier and Kane now seem certs to be included in Roy Hodgson’s 23-man Euro 2016 squad, while Rose too is in with a fine chance.

Tottenham’s stars passed their auditions with flying colours. It is now time for two of Liverpool’s first-team stars to prove they are up to the job.

There are many England players who are yet to feature during this international break, which concludes with a home clash against Holland this evening.

One man who will feature against the Dutch is Daniel Sturridge. According to BBC Sport, the Liverpool striker is set to start, while the same source confirme that clubmate James Milner will captain the side.

Sturridge’s last England start came 18 months ago, with long-term injury problems keeping him out of the side.

He has scored seven goals in 14 games for Liverpool this season, including this fine finish in 3-2 defeat to Southampton earlier this month.

Ultimately it will probably be fitness, rather than form, that decides whether Sturridge goes to France this summer, but he will still be keen to remind Hodgson of his worth tonight, especially with Kane and Jamie Vardy getting so much media praise recently.

Milner being named captain seems to suggest that Gary Cahill, who wore the armband in Berlin, will not be in tonight’s starting XI.

His place will likely be taken by Phil Jagielka or his Everton centre-back partner, John Stones. Both could play some part.

Manchester United’s Chris Smalling, who fared much better than Cahill against Germany, should be given another cap – just to keep things stable, while Hodgson may be forced to stick with Rose at left-back due to Ryan Bertrand’s withdrawal from the squad because of injury.

However, change is anticipated at right-back, where Tottenham’s Kyle Walker will likely be given a chance to impress in the position which Liverpool’s Nathaniel Clyne occupied on Saturday.

Two of Leicester City’s star men will be hoping to be be involved from the start. Striker Vardy, who scored his first England goal as a substitute in the weekend win, and uncapped Foxes midfielder Danny Drinkwater both seem to have a good chance of being in tonight’s first XI.

Other players who didn’t feature against Germany – and are therefore likely to be given a chance tonight – include Arsenal’s Theo Walcott and Everton’s Ross Barkley.

Here’s how we predict Hodgson will set up his side against Holland in what is the final England match at Wembley before the Three Lions boss names his Euro 2016 squad. 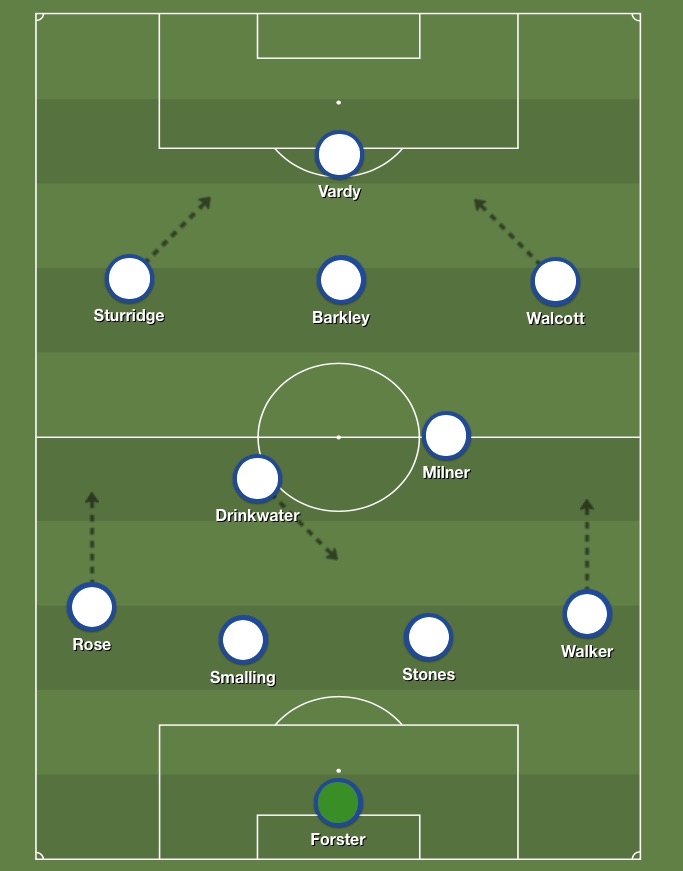