The Boston Celtics are expected to continue their aggressive rebuilding process.

He has only just returned to active duty after having surgery to his torn ACL, but Boston Celtics point guard Rajon Rondo’s name has again surfaced in the NBA trade rumor circles.

While this is hardly a new phenomenon, with perhaps only the Lakers’ Paul Gasol mentioned more in recent season in regards to being traded, it still begs the question of how much in the way of assets will be shipped out the door by the Celtics.

“Rondo is the last blue chip from the 2008 championship team and 2010 Finals team that Celtics president Danny Ainge can convert into assets as he rebuilds the franchise. More than a few GMs around the league expect Rondo to be on the move, if not at the trading deadline next month, then maybe in June at draft time,” Mitch Lawrence of New York Daily News wrote.

“Rondo probably isn’t going to accept a role in a rebuilding situation with a rookie coach, Brad Stevens, so look for Ainge to try to move him to the West, with Phoenix and Houston seen as two potential destinations. Dallas has always had interest in the four-time All-Star, who blew out his right knee last January, but Mark Cuban doesn’t have the assets to make it work.”

Boston GM Danny Ainge has been aggressively accumulating future draft picks, and that can only help accelerate the restocking of his roster.

When Ainge traded Jordan Crawford and former Net MarShon Brooks to Golden State this past week in a three-way deal with the Heat, the Celtics picked up two more draft picks.

Between Ainge’s deals with the Nets and Clippers and other moves, the Celtics now have 17 potential draft picks over the next five seasons.

Some will be used for their drafts, but others are likely to be included as sweeteners in deals for established players.

And while it remains to be seen if Boston is willing to gamble a significant chunk of its pay to a four-time All-Star guard who may or may not return to his best after an injury that typically takes NBA player two years to overcome. 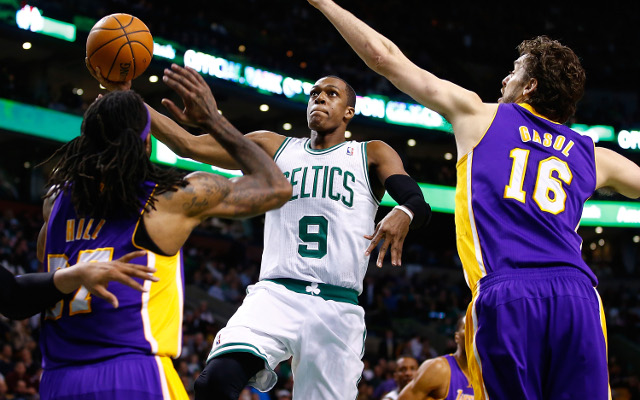