The New York Knicks are reportedly set to meet with former Wisconsin star Frank Kaminsky ahead of the NBA Draft 2015 which takes place on June 25.

The Knicks have the fourth overall pick at the Draft but they are reportedly open to listening to all deals whether that allows them to trade for established talent or to pick up multiple picks further down the board.

It is widely expected that Karl-Anthony Towns, Jahlil Okafor and D’Angelo Russell will be the first three players to be picked, going to the Minnesota Timberwolves, Los Angeles Lakers and Philadelphia 76ers respectively.

After that, things get a little unclear as to which prospects have done enough to catch a certain team’s eye, and that is ultimately why the Knicks are assessing their options carefully as this will be an important pick for their future.

“The best player in college basketball, whom some Knicks fans would like to see them trade down in the draft in order to snatch, 7-foot senior Frank Kaminsky, is tentatively scheduled to meet with the club next Tuesday and Wednesday in New York, according to a league source,” the New York Post reported.

It is added that Kaminsky interviewed with Knicks president Phil Jackson at the combine in Chicago last month, and so it remains to be seen whether or not they like him enough to consider their options.

If the Knicks feel as though the talent level drops significantly after the top three picks, then there is every chance that they make a deal with another team to trade down and pick up Kaminsky where possible.

Nevertheless, it promises to be an intriguing Draft process given the importance that the picks will have for their respective teams moving forward with plenty of giants looking to rebuild.

Frank Kaminsky on Andrew Harrison’s comment: “I’m over it” 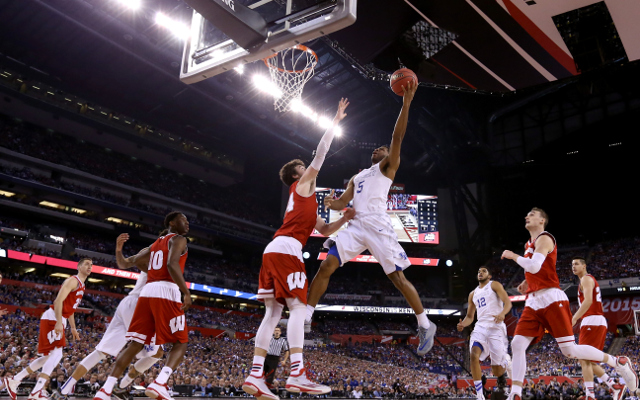