fanatix | Basketball | NBA | Indiana Pacers | NBA news: Indiana Pacers G Paul George expects to return mid-March
The Pacers star Guard has been out since August when he hurt his leg in an exhibition game.

Indiana Pacers G Paul George expects he will return to practice for the Pacers in early March, and will be ready to return to the court mid-March.

In an interview with Yahoo! Sports, George told Marc Spears that he could return by March 14, in time for the Pacers’ game against the Boston Celtics – a critical matchup for them as they try to get into the playoffs.

“March 1 isn’t when I wanted to play my first game, but when I wanted to be full-out practicing, doing up-and-down full court without any restrictions or limitations,” George said. “From there on, it’s seeing how far I can progress to where I play my first game. My hope is it’s an opponent where I feel comfortable coming back to where there isn’t too much pressure to perform, where I can ease my way back in. But I want to say around mid-March, I could probably come back around that time.”

Ever since suffering a compound leg fracture in a USA Basketball exhibition game in August, George has been out of basketball and rehabbing his leg, but the Pacers have not shut him down for the season.

George was an NBA All-Star in 2014, averaging a career-high 21.7 points per game. The Pacers have struggled without him as they have fallen to 21-33 on the season, and are two games behind in the race for the 8th spot in the Eastern Conference playoffs.

George added that a matchup in the playoffs with either the Atlanta Hawks or LeBron James’ Cleveland Cavaliers would be ideal.

“I think if that happens the story kind of writes itself. That would be ideal, especially if we go against Atlanta in the first round because we were the first seed last year. That’s a rematch they want for sure as well,” he said. 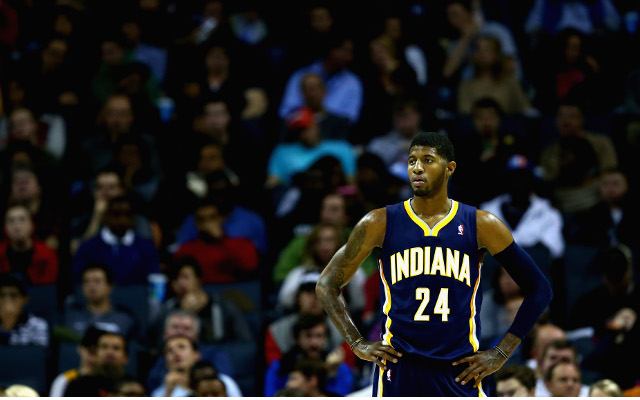 (Video) Paul George pulls off the big-time dunk for Indiana