Man United are bringing in an untested rookie to potentially replace David de Gea against Tottenham.

The Man United goalkeeper situation is about as ugly as it gets in the Premier League. With star stopper David de Gea deactivated and expected to leave, Man United are bringing in the young guns – namely, rookie Sam Johnstone.

According to the Daily Star, the 22-year-old Johnstone – who has never played in a Premier League match – is expected to be one of the candidates for Louis van Gaal’s starting XI against Tottenham Hotspur this weekend.

David de Gea, who was named to last year’s PFA Team of the Year, has made it clear he wants out of Old Trafford, but he isn’t the only one.

No. 2 stopper Victor Valdes has also expressed his frustration with the club ever since they refused to name him De Gea’s outright replacement. Valdes has not been given a squad number to start the season.

Johnstone has been with the Man United senior team since 2011 but has only been placed on loan spells with Scunthorpe, Walsall, Yeovil, Doncaster and Preston North End.

Eleven months ago, the Daily Star revealed that the Man United club shop made an epic gaffe by spelling Johnstone’s name wrong on official shirts (see if you can figure out what the Red Devils did wrong…): 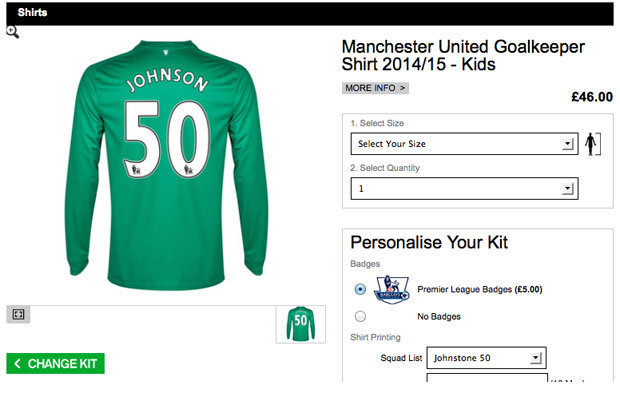