Pitcher locked in from the first inning as the Tigers deny the Athletics in MLB playoffs.

Verlander had his no-hit bid broken up by A’s Yoenis Cespedes’ two-out single in the seventh inning.

“I can usually tell by the look on his face and his demeanor prior to a game when he’s zeroed in and locked in,” said Tigers manager Jim Leyland. “He was locked in tonight.”

The Tigers will travel to Boston’s Fenway Park to face the Red Sox in Saturday’s game one as the Major League Baseball post-season is now down to just four teams.

Thursday’s winner-take-all game five of the opening round playoff series was a rematch of game two, but this time Verlander got the best of A’s rookie pitcher Sonny Gray.

Miguel Cabrera’s two-run homer in the fourth inning off Gray was all the offence Detroit needed with Verlander on the mound. It was Cabrera’s first home run in more than three weeks.

Verlander struck out 10 and walked one and threw a total of 76 strikes. He allowed just two singles.

With two outs in the ninth, Detroit reliever Joaquin Benoit gave up a double to Jed Lowrie and hit Oakland batter Cespedes to bring the potential tying run to the plate, but Seth Smith flied out to end the best-of-five series.

The Tigers reached the Major League Baseball semi-finals for the fourth time in eight seasons.

They are the first team to make three straight semi-final appearances since the New York Yankees won four straight AL pennants from 1998-2001.

The winner of the Detroit and Boston series will face either the Los Angeles Dodgers or the St. Louis Cardinals in a best-of-seven World Series championship.

Verlander was perfect through 5 1/3 innings until he threw four consecutive balls to Josh Reddick after going up 0-2 in the sixth. Reddick also singled off Verlander in the eighth.

The 23-year-old Gray was charged with all three Detroit runs in five-plus innings, giving up six hits and four walks with three strikeouts.

Gray, who got the start over 18-game winner Bartolo Colon, didn’t give up a hit until the fourth.

The A’s lost for the 12th time in their last 13 potential clinching games in the post-season. They were knocked out of the playoffs by Detroit for the third time in a row.

A’s manager Bob Melvin said he expected better results in the playoffs. Trying to beat Detroit twice with Verlander as the starter turned out to be too much to ask for.

“He was on it early. We weren’t getting very good swings on him,” said Melvin. “I thought maybe when it started to get darker, we would get better swings, but he kept throwing fastballs.

“We’re just trying to get him in the stretch,” Melvin said. “Our fans were just waiting for a reason to get into a frenzy.” 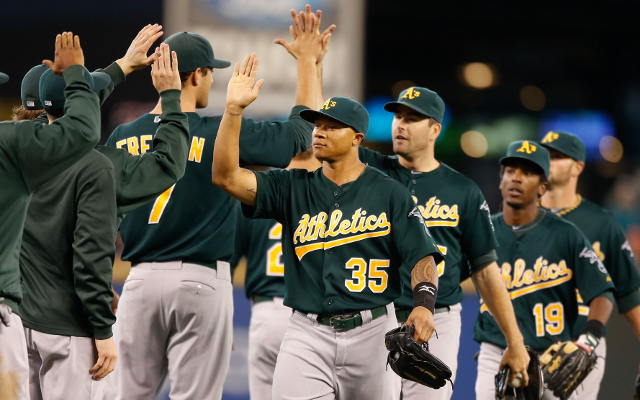