Angry Bangladeshi cricket fans have taken to the streets to burn effigies of umpires Aleem Dar and Ian Gould following their team’s World Cup quarter-final loss to India on Thursday.

According to the Daily-Sun, several hundred fans chanted slogans against the International Cricket Council and burnt effegies of Dar and Gould.

“We [cricket team] coasted into quarter-finals showing our mettle, but ICC plotters defeated us today. Tigers could play against India and win also, but they couldn’t play against ICC and the two corrupt umpires,” one of the protestors, Shoaib, told Daily-Star.

Shoaib claimed: “It was nothing but a deep-seated conspiracy of the cricket’s regulatory body to help qualify India in semi-finals.”
– See more at: http://www.daily-sun.com/print/front-page/2015/03/20/493691#sthash.t4ZsyGQ1.dpuf

India opener Rohit Sharma survived after being caught on 90 after a marginal no-ball call went against the Bangladeshi’s, with Sharma going on to make another 47 runs and push India past the 300-mark.

It’s fair to say fans of the ‘Tigers’ weren’t happy: 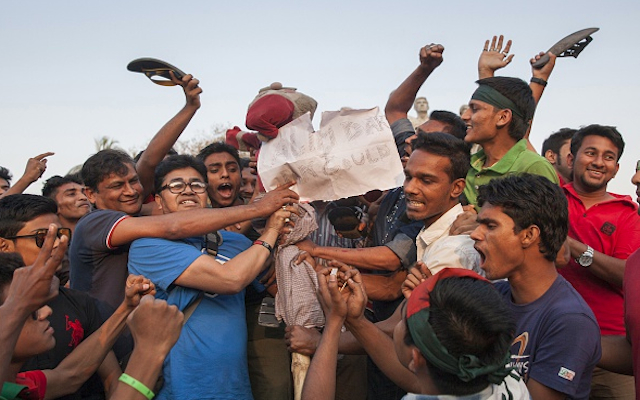