There has been an inordinate amount of injuries this season – more than usual, and it will come as no surprise to see one or two clubs suffering more than others.

For months now fans of both Manchester United and Arsenal fans have complaining of a never ending list of missing faces, and on the evidence below their concerns appear to be justified.

In data compiled by The Telegraph, the graphic also shows that strugglers Burnley are currently sat at the bottom of the injury table in a case of health imitating form.

But the Red Devils are the runaway leaders when it comes to players on the sidelines, chalking up a whopping 68 injuries so far this term, while the Gunners sit in joint second with Stoke having picked up 63 of their own.

Liverpool have fared marginally better with 51, but Chelsea have been much luckier with only 43. 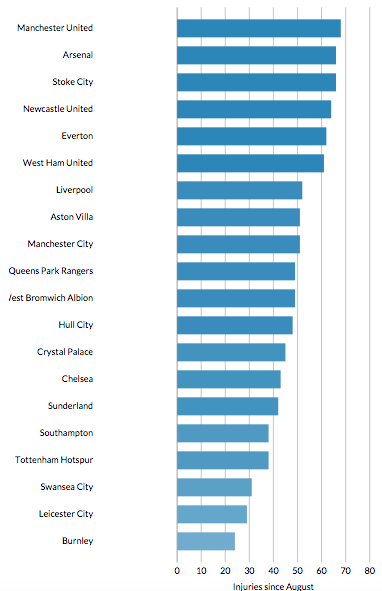