All of the sights and vibrancy during the highly-anticipated game between the two arch-rivals. 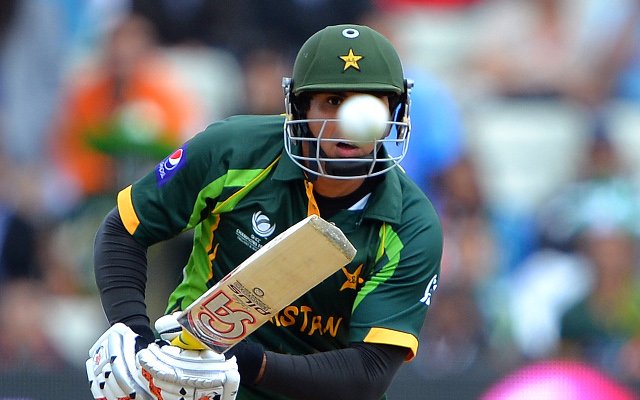 Pakistan’s Nasir Jamshed keeps a close eye on the ball after playing a shot early in his innings against India.

Unfortunately for his side he was unable to form a big partnership with Kamran Akmal, with Jamshed dismissed for just two off 11 balls. 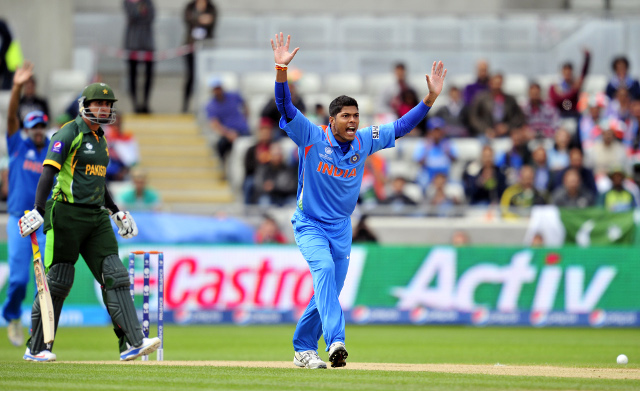 India’s Umesh Yadav appeals unsuccessfully for the wicket of Pakistan’s Nasir Jamshed in their clash in the Champions Trophy on Saturday.

Yadav did not have a happy day with the ball in only securing 0-29 off 6.4 overs, as the other Indian bowlers shared the wickets between them. 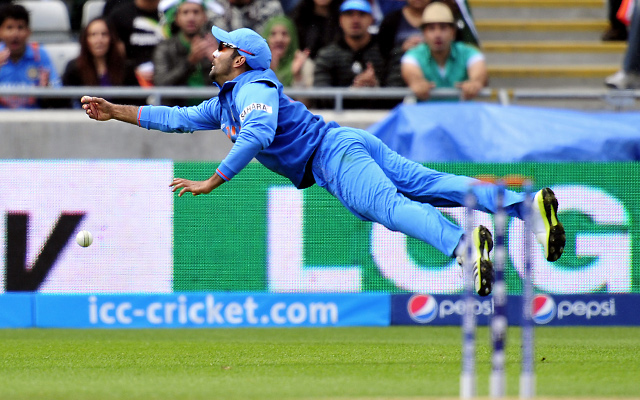 India’s Dinesh Karthik misses a catch during the 2013 ICC Champions Trophy cricket match between Pakistan and India at Edgbaston in Birmingham.

Despite this missed chance, India has greatly improved its standard of fielding in recent times, one of the big reasons why they are always a threat in limited-overs games. 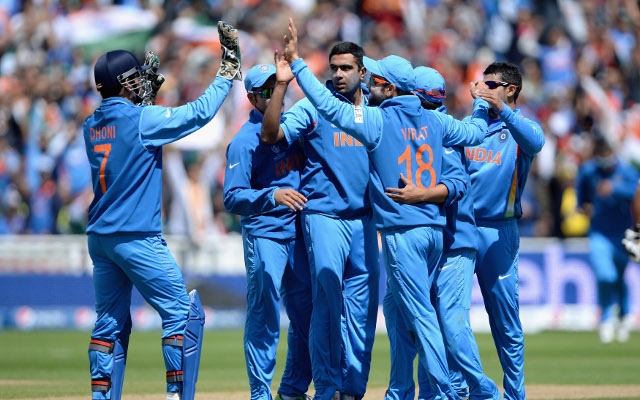 Ravichandran Ashwin of India celebrates with teammates after dismissing Kamran Akmal of Pakistan for 21 off 68 balls.

Plenty of the Pakistan top-order got starts in the difficult batting conditions, but none of them were able to go on with the job as India chipped away through the middle-order. 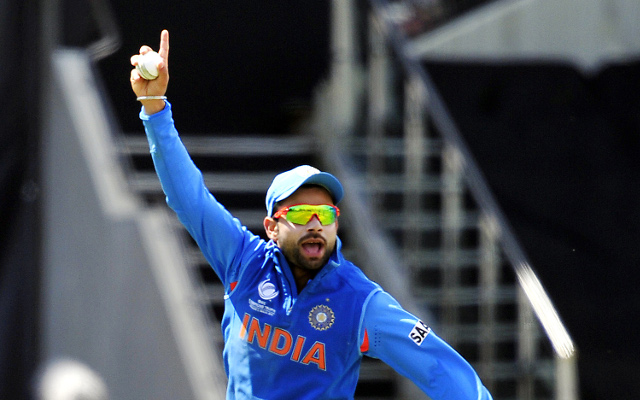 India’s Virat Kohli celebrates catching Pakistan’s Kamran Akmal for 21 runs in what was one of the catches of the tournament to date, as he dived away to catch the ball high above his head. 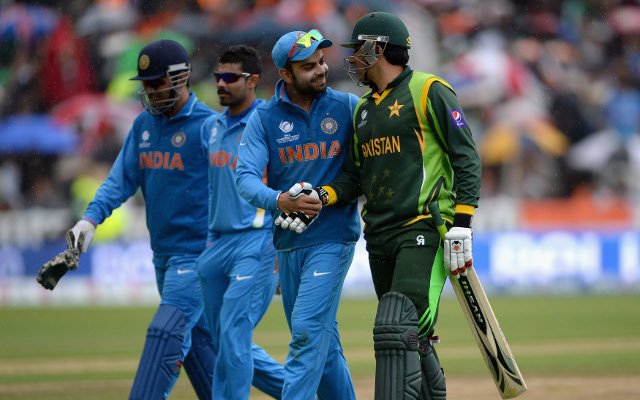 Virat Kohli of India shakes hands with Pakistan captain Misbah-ul-Haq as rain stops play during the ICC Champions Trophy match between India and Pakiatan at Edgbaston. 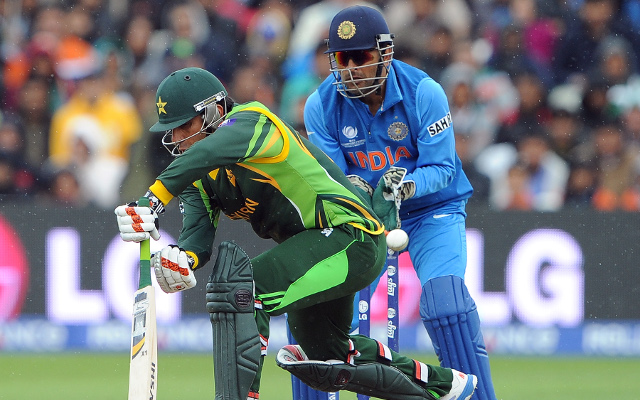 Pakistan’s Misbah-ul-Haq is bowled for 22 during the Indian side’s dominance during the middle-order, with the dismissal of Misbah-ul-Haq, seeing his side falling to be 110-4. 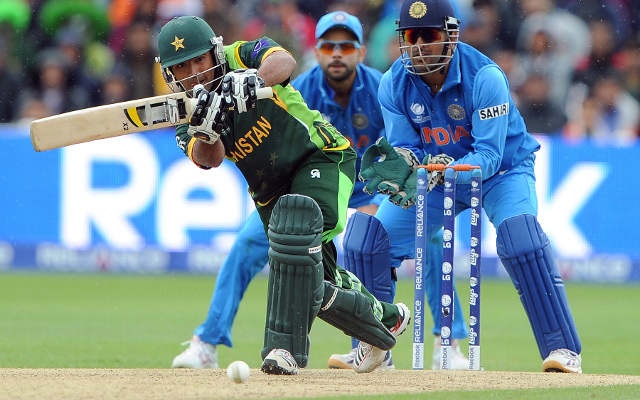 Asad Shafiq plays a shot through mid-on during his knock of 41, which was the highest score for Pakistan in their innings of just 165 in the rain-affected game against India. 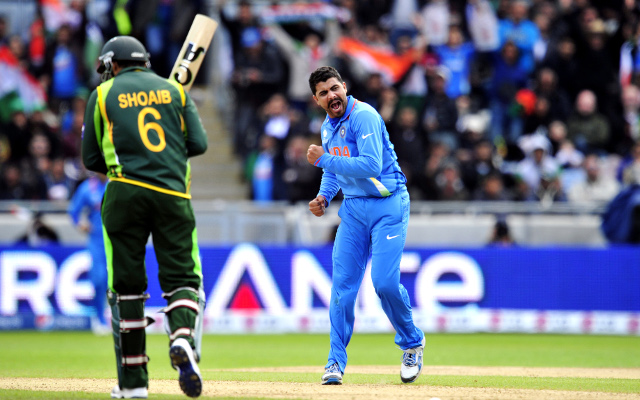 India’s Ravindra Jadeja celebrates trapping Pakistan’s Shoaib Malik LBW for 17 runs to make the score 139-6 as the bowling side started to take control of the game. 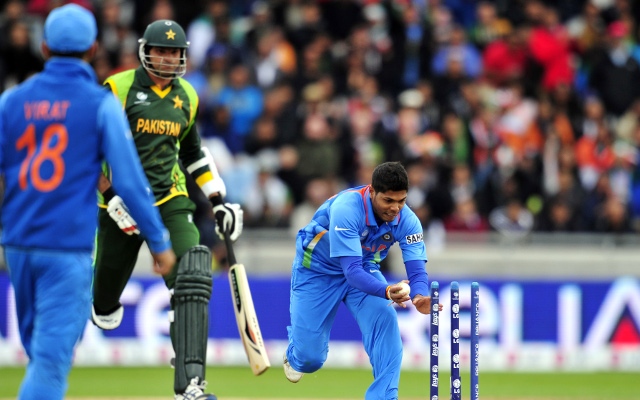 Pakistan’s Mohammad Irfan is run out by India’s Umesh Yadav to end the Pakistan innings in one of the more unusual dismissals of the tournament to date.

Irfan blasted a drive back down the wicket only to see it hit the stumps at the non-striker’s end, dislodging the bails.

Irfan set off for the run, but the quick thinking Yadav grabbed the ball and ran to the stump, pulling out one with the ball up against it, as is written in the rules of the game when the bails are off the stumps and a fielders wishes to enact a run-out. 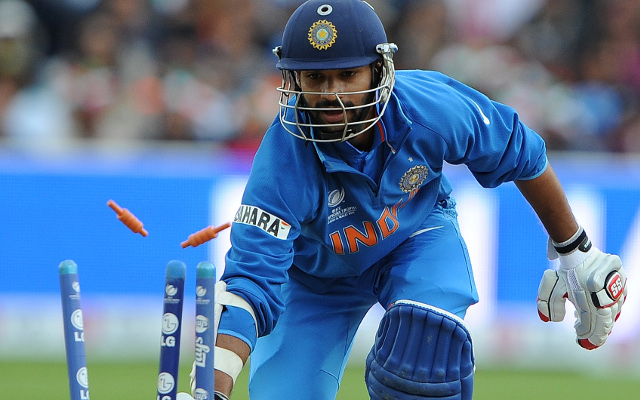 India’s Shikhar Dhawan makes his ground and avoids being run out as the ball thuds into the wickets during his important innings of 48 off 70, which was the backbone of the run-chase by his side. 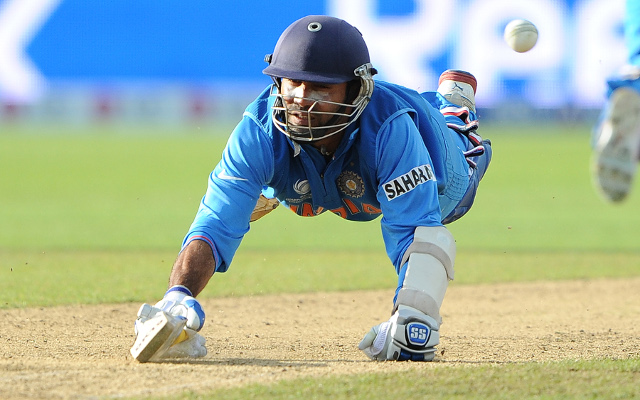 Dinesh Karthik dives full stretch for the crease during his brief cameo at the end of the Indian innings, with his 11 not out helping his side to an easy eight wicket win in the rain-affected game.