Ethan Carter III has promised that TNA will get better and better this year, in the build-up to the company’s eighth annual UK Tour. Carter – know simply as EC3 – will be one of the headline attractions when TNA descends on Manchester, London and Birmingham in January next year, and the popular star is hoping for another great response from the British fans.

Carter, whose real name is Michael Hutter, has firmly established himself as one of professional wrestling’s biggest rising stars over the last 18 months. His feuds with some of the sport’s most famous faces, including Sting, Kurt Angle and Bully Ray, have placed him firmly on the map, while the fact that he’s gone unpinned and unsubmitted since his debut in the company in October 2013 only adds to his growing reputation.

Now, with his eyes firmly set on capturing the TNA World Heavyweight title for the first time, it’s easy to see why Carter is attracting such a storm of media attention. As the on-screen nephew of company president Dixie Carter, EC3 has become one of the most prominent heels in professional wrestling today. His reputation is no stronger than in the UK, where his presence caused something of a storm earlier this year.

Speaking about the prospect of returning to Britain at the start of next year, Carter was enthusiastic with his thoughts on TNA’s international audience.

TNA’s presence in the UK has been a complete revelation. The tours have proved more and more popular each year, with Carter playing an important part in their most recent efforts. His ‘Hair vs Hair’ match against British-born star Rockstar Spud at Wembley earlier this year was sensational, and while it ended with our home favourite having his head scalped bald, Carter was delighted by the reaction it received.

“The only sound I hate is the sound of indifference and I don’t seem to get that,” he laughed, recalling a response that included having two pints of beer thrown at him from the crowd. “That’s very important for me. The fact that only one or two pints of beer were thrown at me actually discouraged me because I wanted entire kegs thrown at me.

“I guess you guys don’t have the liquid courage enough to throw more stuff at me. But that’s why we’re coming back next year, when I’ll be welcoming any and all pints being thrown at me. It’s because the best thing about this industry, the best thing about being a performer, is the emotion that comes from the fans.”

Despite being a heel, Carter enjoys something of a cult following, particularly among his British fans. He’s the man everyone loves to hate. In fact, for every fan chanting “you can’t wrestle”, there’s someone else chanting back “yes he can”. His battles with the audience have become almost as popular as those with his opponents, and as he prepares for the new tour, he explained to me how he plans to impress in 2016.

“I think the only way to top a good old fashioned scalping in a young man’s homeland is to go to the UK as the TNA Heavyweight Champion and defend the title against any and all Brits on the roster,” he said confidently.

Carter’s rise to the top won’t be stopped. Despite currently being locked in a feud with TNA veteran Mr. Anderson, a programme with Angle feels inevitable. The pair clashed several times at the start of 2014, but their match-ups were restricted by a series of injuries to the Olympic Gold Medallist, who was eventually forced to take several months away from the ring in order to recover.

Thankfully, Angle returned earlier this year to claim a record sixth world title – defeating Bobby Lashley – and is currently entertaining the challenge of Eric Young. You can’t help but feel that both the Carter-Anderson and Angle-Young rivalries are building up towards a dream meeting between the two victors at Slammiversary next month – TNA’s first major pay-per-view in more than seven months.

Our interviewee is certainly feeling positive, as he explained in comprehensive fashion. He said: “There’s been a lot of guys that have been multiple time World Heavyweight champions but there’s never been a guy who has been World Champion once and never lost it until he retired. So I think that would break new ground. I think that would be pretty exceptional and that’s my main goal.”

Nothing could underline TNA’s current direction more perfectly that this impending battle between young and old, youth and experience, wannabe and veteran. Slammiversary could well play host to an iconic moment in TNA history, the passing of the torch from one breed of champion to the next. And if you look beyond the characters and the storylines, there feels no better moment than this for EC3 to take the gold.

Carter has paid his dues his over the last two years. As he says himself, his lengthy feud with Bully Ray – which included a Texas Death Match at last year’s Slammiversary, really helped establish him among the cream of the crop. And now, with this year’s event less than a month away, the anticipation in this young man is clear to see.

“I think the whole feud with Bully Ray was the one that kind of put me on the map in TNA,” he admitted. “It’s a feud that’s very close to my heart. There were great matches top to bottom [last year] and to do it again, have the opportunity to come back with another pay-per-view and try to top what we’ve already done… I’m looking forward to it and I’m sure the rest of the roster is as well.”

The event will represent a wonderful opportunity for TNA to put out a big statement of intent. The press was rife last week with painfully ridiculous reports regarding the company’s supposedly impending downfall and, as Carter tells us, there’s no better way to prove those keyboard warriors wrong than by putting on a great show in the ring.

“I’ve used this quote already but I’ll use it again,” he told me. “You’re a UK man, a Brit, so I’m sure you look up to a man called Winston Churchill. He once said that a lie will travel half way around the world before the truth has the chance to put his pants on in the morning, so there you go. This company has been around 13 years and for 13 years there have been negative things attributed to it. But it’s here, it’s not going anywhere, deal with it.

“There have definitely been a lot of positives and that’s a tribute to the great fans we do have. I think moving over to Destination America, that was an opportunity for us to take a step back from trying to top a show weekly. Now, we’re building a foundation of great television and great storytelling.

“I think creatively we’re really on point. In the coming weeks there’s some really great stuff, and with the addition of Billy Corgan on the team too, we’re going to be excellent continuously. That’s what we should be and that’s what the show should be. It shouldn’t be something that insults your intelligence, it should be something that people genuinely enjoy.”

Indeed, even the harshest of TNA critics have been taken aback by Corgan’s impact. The arrival of the Smashing Pumkins singer was written off in places as little more than a publicity stunt, but as Carter tells me, it’s proved to be anything but.

“Definitely in the short-time I’ve had to work with him I’ve actually been super-impressed. It’s not only his knowledge of the industry but also how he harkens to the past and the old school mentality, the old school storytelling and stuff. It’s something that we might not think about so much in 2015.

“We can make what is old new again and we can really grow. I think creatively he has some really good ideas as far as character direction and having our characters be three-dimensional – not so much black and white, but shades of grey. That’s why it’s been a very positive experience and one that I’ve enjoyed thoroughly.”

Carter has certainly come a long way from the young wrestler who once went to work under the name Derrick Bateman. He, like so many others, fought tooth and nail to make the grade in WWE but was ultimately left disappointed. Fast forward to 2015 and he’s delighting in becoming his own man in TNA.

While he’s quick to point out that he holds no grudges over his 2013 exit from WWE, Carter tells me that he wouldn’t change anything about the way things have worked out: “I had a foundation where I learned a lot, for better and for worse. But this is an opportunity I wouldn’t have had over there. I wouldn’t trade this position for anything over there.”

So what’s next for EC3. The answer is surely pretty clear? You only have to look at his Twitter page to see his character’s adopted hash-tag – #EC3forchamp – as well as his multiple presidential-esque campaign videos. Like it or not, Carter is going to be swimming in gold before the end of 2015.

“I think from me, the things that we’ve talked about, becoming World Heavyweight Champion, holding it for the next ten years and then retiring as champion,” he says, when asked what’s next for himself and TNA.

“As far as the company, I think to continue to have success and continued growth with what we’re doing. Creating compelling stories and compelling characters, entertaining, providing an alternative to what you may see elsewhere. I think, with the UK coming up, to go in with a new energy and new excitement. Coming over there, filling up the arenas, shaving people’s heads, the usual, my usual UK Tour.”

You can watch Ethan Carter III and the entire TNA roster on Destination America every Wednesday, starting June 3rd, and every Sunday on Challenge TV. Will EC3 be World Heavyweight Champion come the next UK Tour? Well, you’ll just have to wait and see… 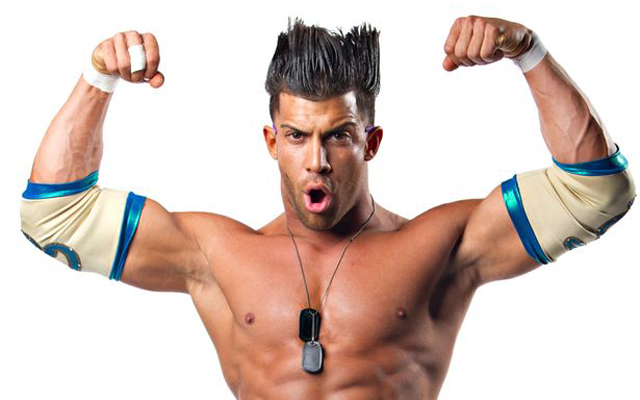 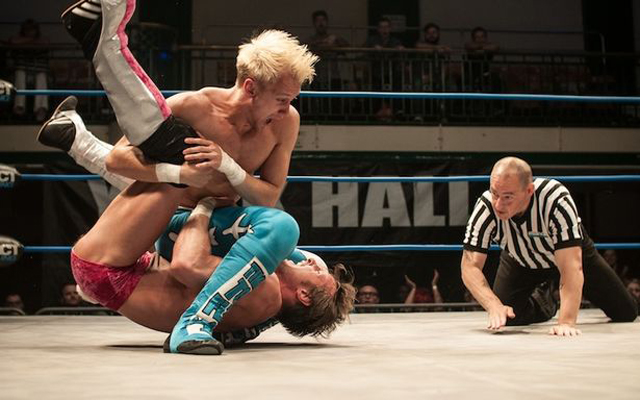 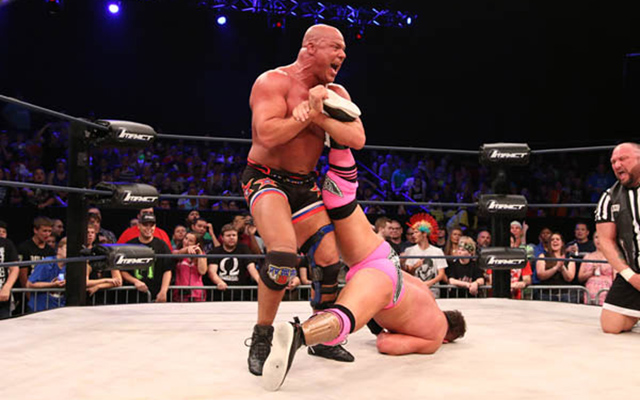