England’s pre-Ashes momentum continued on Tuesday evening as Eoin Morgan’s boys followed up their dramatic 3-2 ODI series win over New Zealand with an emphatic 56-run victory against the Black Caps in a one-off T20 international at Old Trafford.

New Zealand could not even get close to their victory target of 192, as pace pair David Willey and Mark Wood took three wickets each.

Hales and Roy got England off to an explosive start. Roy hit Mitchell McClenaghan for two sixes in the second over.

Roy added a fine four to his tally in the following over, which ended with the Durban-born batsman being run out.

Hales was at fault for Roy’s dismissal, but the Nottinghamshire opener made up for his error by smashing two fours and a maximum, before perishing to a decent catch from Brendon McCullem.

Hale’s departure left England on 76-2 early in the ninth over. The over ended with another wicket, as Jonny Bairstow (1) fell victim to a peach of a delivery from Mitchell Santner. Santner dropped Bairstow in Sunday’s ODI, allowing the ginger slogger to win the series for England, so this will have felt like sweet revenge for the slow left-arm Kiwi bowler.

Santner completed his four overs with two wickets and a decent economy rate of seven, but his fellow bowlers were not as efficient.

Tim Southee and Nathan McCullum both went at more than 11 runs per over. The latter was absolutely destroyed in the 15th over, which went for 23, having begun with this four, which brought about Root’s second T20I fifty.

McClenaghan and Martin Guptill combined to dismiss Root, with 16 balls of the innings remaining.

However, Stokes continued the assault, hitting four boundaries, including this one to finish the innings.

Although 192 looked a commanding target, New Zealand were confident that their firepower would see them home.

That confidence appeared justified when Guptill began the Kiwis’ innings with a cracking four through point, before guiding his next delivery to square third man for two.

However, Guptill was lost his wicket facing his third ball, as Willey knocked over his leg stump.

Guptill’s exit did not dampen Brendon McCullem’s zest for life. The white-ball destroyer hammered four sixes, causing plenty of concern for England, until Wood got very lucky, getting him out for 35 from 15.

Taylor made just 17 off 13. He was removed by Adil Rashid, with the aid of a smart catch from Willey.

New Zealand’s only hope was for Williamson to do it all himself. And he tried. He brought up his fifty inside 32 balls.

However, a poor call from Nathan McCullem saw Williamson run out in the 15th over. 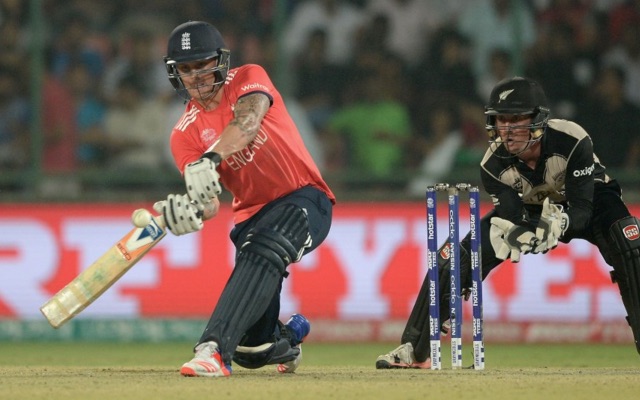