Two of the last three champions meet in what is sure to be a hard-fought and physical Stanley Cup tie.

In the first National Hockey League Final between “Original Six” clubs since 1979, the Chicago Blackhawks and Boston Bruins will battle for the Stanley Cup starting on Wednesday in Chicago.

An NHL season that did not begin until mid-January thanks to a money dispute between club owners, and playoffs that prompted a lockout, will end two weeks later than usual in a classic showdown between two of the past three champions.

The Bruins bring back 17 players from the squad that won the Cup in 2011, including captain Zdeno Chara, a Slovakian defenseman whose size makes him difficult for opposing forward to cope with when attack the Boston net.

“We know there’s still a long ways to go,” Chara said. “But we gave ourselves a chance.”

Chara’s toughest challenge might be stopping one of his countrymen, Chicago winger Marian Hossa, who will appear in his fourth Stanley Cup final.

“You enjoy this moment because you never know when you can get another one,” Hossa said. “This is an awesome feeling.”

“I’ve been watching Boston play in the East. They are rolling right now pretty good,” Chicago winger Patrick Sharp said. “Another tough series ahead of us but it’s an exciting time right now for the Blackhawks.”

Chicago opened the season with 21 wins and three over-time losses, producing points in a record 24 games to start a season. They finished with the best mark in the NHL and hope to duplicate their championship run.

They will be tested by “Cool Hand Tuke”, the nickname given Finnish goaltender Tuukka Rask of the Bruins, who blanked the Penguins twice in four games after Pittsburgh, which led the league in regular-season scoring, had produced goals in 96 games in a row.

Rask totaled 134 saves in four games against the Penguins with a 98.5 percent save ratio and a 1.75 goals-against average.

Boston barely escaped the first round of the playoffs, trailing Toronto by three goals in the last half of the final period of the seventh game of their series before rallying to win in over-time, an unprecedented feat from such a deficit with so little time remaining.

“You’re not depending on one or two guys and everybody waiting for them to score,” said 41-year-old Bruins winger Jaromir Jagr, a Czech star who seeks a third Stanley Cup after helping Pittsburgh claim the crown in 1991 and 1992.

“Here everybody can score any time. Coach tries to roll four lines no matter what the situation is. It’s a huge advantage.”

(Video) Chicago on the cusp of capturing Stanley Cup 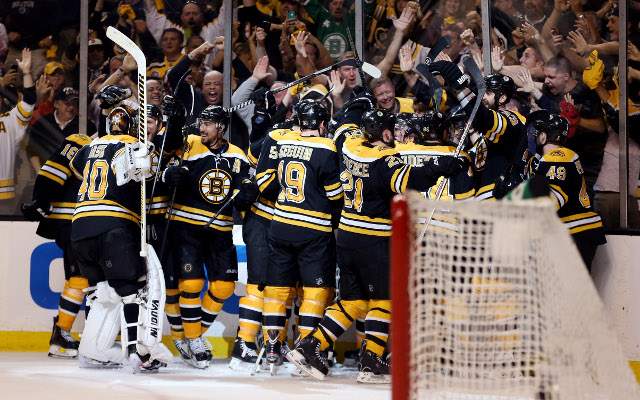