The East Carolina Pirates will seek to improve to 5-1 as they travel to face the South Florida Bulls, who are coming off a bye week and looking to even their record.

No. 19 East Carolina has been on a hot streak since losing to South Carolina, winning three games in a row and improving their record to 4-1. They will look to improve to 5-1 against South Florida on the road.

The Pirates offense has shined throughout the season, scoring 43.6 points per game. They handily defeated SMU, 45-24, under the leadership of quarterback Shane Carden.

Carden threw for 410 yards and four touchdowns on 31-of-41 passing, raising his total number of touchdown passes to 15.

The Pirates running game also looked solid as they rushed for a total of 171 yards with a committee approach. They have taken this route throughout the season, as demonstrated by four of their running backs having at least 100 yards on the season.

Meanwhile, the Bulls fell to 2-3 after losing to Wisconsin before having a bye week. The Bulls have failed to execute on offense, as they have been held by their opponents to 19.4 points per game. This ranks 114th in the country.

Quarterback Mike White has performed abysmally, completing only 40 percent of his passes and throwing just two touchdowns against three interceptions.

This may explain why their defense has also struggled, allowing 29 points per game. If Carden can help his team storm out to an early lead, the Pirates should have no issue putting the Bulls away. 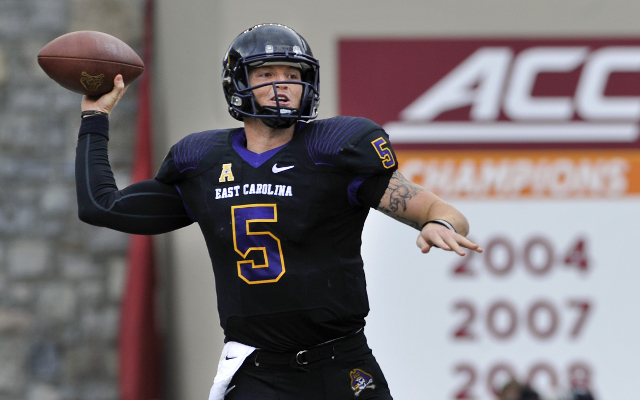