ACT side continues to set the pace ahead of a blockbuster clash next week.

The ACT Brumbies scored six tries to crush the Western Force 41-7 in a lopsided Australian derby to extend their lead at the top of the Super 15 standings in Canberra on Saturday.

Fijian winger Henry Speight scored a double to become the tournament’s leading tryscorer as the Brumbies had little trouble in tossing aside the inept Force.

Jake White’s Brumbies bounced back from the previous week’s dogged 19-19 draw with the Queensland Reds to play some scintillating rugby and wrapped up a four-try bonus point by halftime.

The Brumbies raced to a 15-0 lead in 21 minutes after tries to fullback Jesse Mogg and Speight and scored further tries to Fijian centre Tevita Kuridrani and a second one to Speight to lead 29-0 at halftime.

Even though they were reduced to 14 men by the sin-binning of Wallaby hooker Stephen Moore four minutes after the resumption they continued on with their scoring spree.

Winger Joe Tomane swept on to a one-handed offload from fly-half Matt Toomua to score in the corner and Australia Under-20 hooker Siliva Siliva powered over for his first Super Rugby try with 11 minutes left for the Brumbies to lead 41-0.

The Force finally crossed the line when skipper Matt Hodgson scored off the back of a rolling maul with six minutes left for Force’s consolation converted try.

Christian Lealiifano kicked four conversions and a penalty to finish with 11 points. 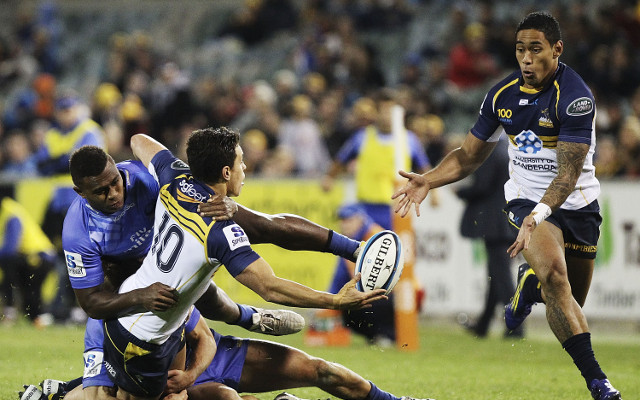 “We didn’t quite get a result in Brisbane last week but we got a lot of momentum out of it and we know we have to keep pushing our game, and tonight was another step towards that,” Brumbies skipper Ben Mowen said.

“We continue to push our strategy each week and we had to play a very disciplined style last week because the conditions demanded it but tonight we tried a few things early and they worked so we could open up a bit.”

It was a spectacular unravelling of form for the Force after their rousing 16-14 home win over the Canterbury Crusaders a fortnight ago and they looked a dishevelled outfit at times against the Brumbies.

“They were good tonight and they had a big game last week and learnt a lot from it and it was disappointing for us after our solid performances in the last two weeks,” Force captain Hodgson said.

“We gave the ball away too easily, we worked hard but for no reward tonight.”

The Brumbies are now shaping up for a blockbuster next weekend against the seven-time champions Crusaders in Canberra, while the Force are at home to play the Queensland Reds.