Chelsea took another confident step towards the Premier League title on Sunday as they parked the bus at the Emirates Stadium to earn a 0-0 draw against rivals Arsenal.

The result frustrated the Gunners and left them 10 points behind Chelsea in the table with just five games left to play.

Arsenal are better to watch than Chelsea – very few neutrals would disagree. With that in mind, Bet365 asked Twitter users an interesting question… ‘Is it better to be boring and win the Premier League or be stylish and fail to win the title?’

Amazingly, after an hour of voting, 584 of the 820 respondents had said that they would prefer to be stylish and unsuccessful.

So, based on that twisted logic, Arsenal are the ‘REAL champions’ this season… 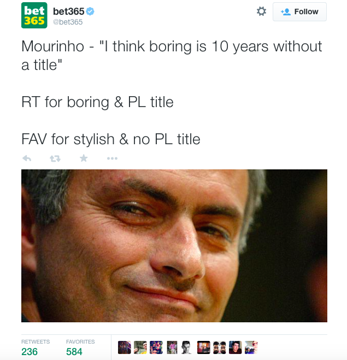