Arsenal move into third place as Gunners get ahead of steam in race for fourth.

Arsenal held on in the dying embers of the game at Selhurt Park after Crystal Palace refused to accept defeat.

The Gunners went 2-0 up in the first half with goals from Santi Cazorla and Olivier Giroud, both against the run of play.


Here is our the Arsenal team rated.

Some questionable decision making which caused confusion among the Arsenal back four, otherwise solid. 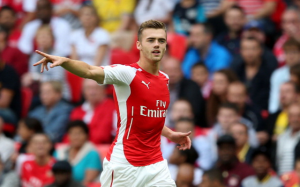 Couldn’t handle the dynamic Yannick Bolasie in the second half having been exposed 1v1.

Failed to clear a number of balls and was targeted due to his lack of pace by Palace’s forward line.

Fought to preserve the Gunners’ lead but was ball watching for the Palace goal towards the end.

Wilfried Zaha got the better of him in the early exchanges, but the Spaniard later became comfortable in the game.