The duo join Man United in the race to sign Muller.

Bayern Munich star Thomas Muller is the subject of a fierce transfer war currently, with Arsenal and Liverpool the latest clubs to enter the fray, reports ESPN.

Reports from German daily Kicker says that whilst Manchester United were the favourites to land the 24-year-old from the Allianz Arena, their Premier League rivals have now also entered the race. 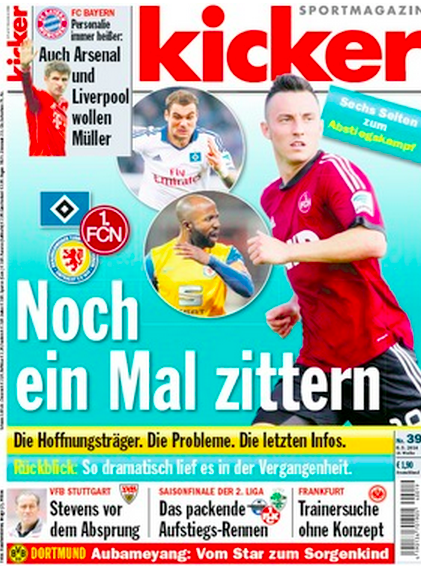 It’s understood that the Germany international has become disillusioned at Bayern due to head coach Pep Guardiola’s rotation policy – which meant Muller failed to play 90 minutes in any of the club’s knockout matches in this year’s Champions League.

With the attacker looking to move the Red Devils saw an opportunity, especially with current Netherlands manager Louis van Gaal expected to be appointed as David Moyes’ successor this summer.

Van Gaal has openly admitted that he would ‘love’ to take the top job at Old Trafford and Muller would like a reunion with the Dutchman – with the duo working together at Bayern between 2009 and 2011.

In fact it was the 62-year-old that gave the German his first opportunities in the first team and the pair have a special bond because of it.

Earlier in the 2013/14 season Barcelona were also linked with Muller, but the player’s agent Ludwig Koegl has quashed those claims.

“Barcelona definitely is not an issue for Thomas,” Koegl told Bild.

If Muller were tempted into a move to any of the English clubs interested in him, then his versatility would ensure he would be a good fit at any side.

Although primarily operating from right midfield currently, the forward can also play as an out-and-out striker, a more deeplying No.10 or even somewhere in between as a ‘false 9’ – a position that many critics think is his best.

Muller’s all round game in the final third is solid and the German is often named as one of the most underrated performers in European football.

Since breaking into the first team under van Gaal the Bayern ace has played 254 games for the club, scoring 98 goals and winning three Bundesliga titles, two German Cups and the Champions League.

Muller was also the Golden Boot winner at the 2010 World Cup and to date has earned 47 international caps and scored 16 times.