Spaniard says there is hope for Catalans despite AC Milan’s advantage.

Andres Iniesta believes that Barcelona will keep fighting to regain the league title and the Champions League, despite their hammering at the hands of the Real Madrid in the Copa del Rey.

Madrid’s 3-1 victory at the Camp Nou on Tuesday night rounded off a terrible week for the Catalans, who also now have a huge task if they are to progress to the last eight of the Champions League after losing 2-0 to AC Milan last Wednesday.

However, Iniesta remains confident of turning to tie around on March 12 and gaining revenge over Madrid when the two meet in the league this weekend.

“We have to think a lot about these two games, about what we have done well and what we have to improve,” midfielder Iniesta told reporters. “We need to recover the feeling of being a compact and infallible team.

“I am convinced that we can recover this tonic. On the 12th we are playing in a hugely important competition and for us it is like a final.

“We need to go out from the first minute as if we were playing for our lives. The tie right now looks very difficult but the only message I have today is that I trust in this team.

“It is a question of pride, necessity and reality and we are capable of turning the scoreline around.”

Reaction to the defeat to their perennial rivals was not as positive in the Catalan press, as speculation began about whether the Barcelona side that has dazzled Europe in recent seasons was now past its best.

“It (the match) was a disaster but we have to get up,” said El Mundo Deportivo on its front page, calling an “unrecognisable” Barca “predictable and slow”.

The paper reflected on Barca’s inability to keep a clean sheet in 12 consecutive games, whilst also questioning how big an influence the temporary loss of coach Tito Vilanova has been.

Vilanova is currently undergoing cancer treatment in New York and the daily said his absence had not only affected the morale of the squad but also the team’s tactical shape.

Another Barcelona-based daily Sport lamented that many fans in the Camp Nou “left the stadium before the end because they didn’t want to see a group who have become a shadow of what they were.

“The game against Milan wasn’t an accident. Barca confirmed all their bad feelings against Madrid.”

In the Spanish capital, however, the mood was different with sports daily Marca declaring “the tide turns” on its front page.

“Relentless Madrid strip bare and annihilate Barca in the Camp Nou to progress to the final of the Copa del Rey,” it added, assessing that the result bode well for the Champions League match against Manchester United at the Santiago Bernabeu on Tuesday.

The match with the English Premier League leaders is finely poised at 1-1.

Focus inevitably also centred on the contrasting fortunes of both sides’ star players — four-time World Player of the Year Lionel Messi and Cristiano Ronaldo — with Marca saying the Portuguese, who scored two goals on the night, put in a “powerful display while Messi was invisible”.

The other Madrid sports daily, AS, was similarly ecstatic.

“Take that, that and that” it said in a headline, calling the game “an exhibition from Madrid”.

“Cristiano decided the game, Messi was a shadow,” it added.

“Ronaldo returns against a caged Messi,” concluded Mundo Deportivo in reference to the Madrid man’s incredible record of scoring eight goals in the pair’s last six encounters at the Camp Nou.

Barca said that Messi, who played the full game, did not train with the side on Wednesday morning and was being treated for “a fever and general sickness”. 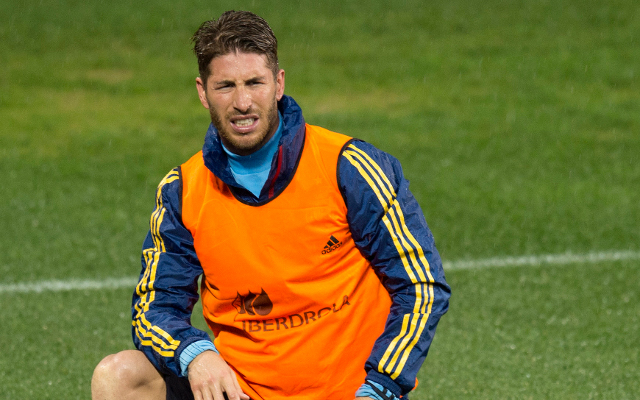