Danish playmaker was quickly found his feet in the Premier League.

Christian Eriksen made a superb start to his Tottenham career with an assist in the 2-0 win over Norwich at White Hart Lane.

Despite being overshadowed by new north London neighbour Mesut Ozil ahead of his bow for Arsenal, the Danish playmaker certainly stole the headlines with a majestic performance for Spurs, in which he made the killer pass for Gylfi Sigurdsson’s first goal of the afternoon (highlighted in yellow on the graphic provided by the FourFourTwo stat app).

There was much contention surrounding where Andre Villas-Boas would deploy Eriksen in the lead up to the match and, like many had suggested, he lined up in the no.10 role behind Roberto Soldado. 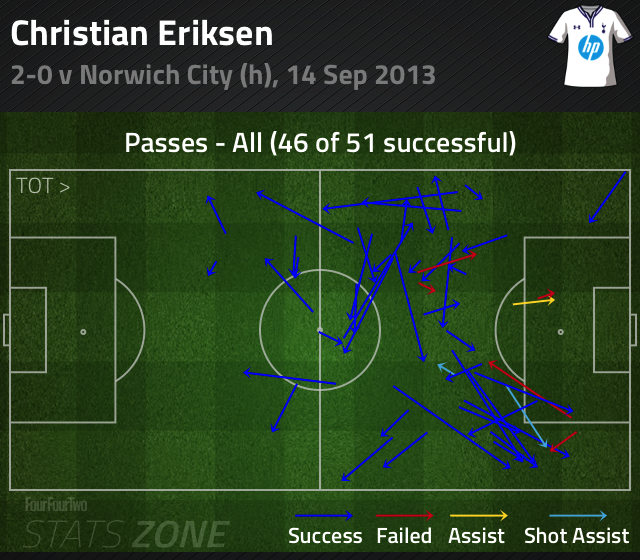 It certainly appears that operating in the space between Norwich’s defence and midfield gave Eriksen greater license to create, fashioning three chances for his new team, and his influence on Spurs’ forward play was evident with 27 of his 51 passes (53%) coming in the attacking third.

He was also involved in the move that led to Sigurdsson’s second of the afternoon, threading a wonderful pass to Paulinho who crossed for the Icelandic international to convert.

A highly promising first showing from the 21-year-old and £11.5 million well spent by Villas-Boas.