After weeks of strange statements and a variety of predictions about his NFL future, Adrian Peterson is back in the NFL.

Former NFL MVP Adrian Peterson has reportedly decided to return the Minnesota Vikings at OTAs today, his first time back with the team since his arrest for child abuse in September.

According to ESPN’s Josina Anderson, Peterson informed her that he was in Minnesota and would be joining his team at organized team activities on Tuesday.

Filed to ESPN: #Vikings RB Adrian Peterson has informed me that he’s in Minnesota and that he’s planning to attend OTAs starting today.

Peterson, one of the most decorated RBs in the NFL today, was arrested in September and charged with child abuse after disciplining his four-year-old son by hitting him with a switch until the child allegedly bled. Peterson later plead no contest to the charges and was given probation, but the NFL suspended Peterson for the entire 2014 season.

When Peterson was finally reinstated there were reports that he was eager to be traded away from Minnesota and a multitude of teams reportedly expressed interest in the former NFL MVP. Peterson reportedly threatened to hold out of all workouts with the Vikings until they acquiesced and traded him, but Vikings head coach Mike Zimmer firmly said that Peterson would play for the Vikings or he wouldn’t play at all in 2015.

Peterson’s 2012 season was among the best in NFL history after he rushed for 2,097 yards in a single season – the 2nd most in NFL history – while coming off a torn ACL he suffered the year before. For his efforts he was named the NFL MVP. 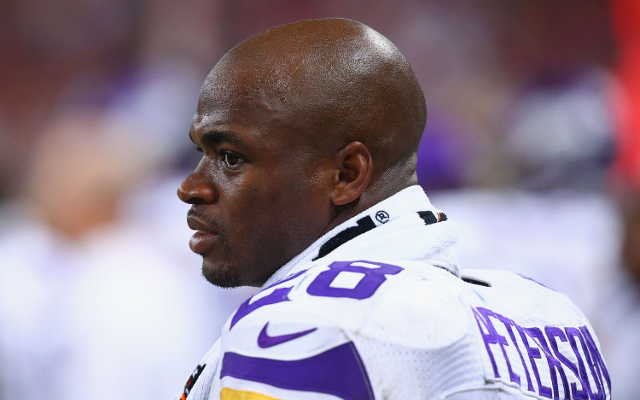