Manchester United manager Louis van Gaal revealed yesterday that he intends to use Marouane Fellaini in forward positions this season.

The Belgian, a midfielder by trade, is yet to feature for the Red Devils in the Premier League this term because of a domestic suspension.

But he will be available for tonight’s Champions League play-off second leg against Club Brugge, and for this weekend’s trip to Swansea City.

Here are five ways that United could line up now that the 27-year-old is back in selection contention:

1) Perhaps Fellaini’s most likely role this season will be as a No. 10 behind Wayne Rooney, a position which the player is familiar with from his Everton days, where he developed from a defensive midfielder.

In this formation, the target man would be expected to drop off and use his incredible aerial prowess to offer United a long-ball outlet, bringing the surrounding attackers into the game with knockdowns. 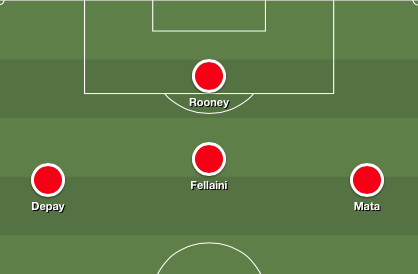