Former 49ers WR Michael Crabtree turned down a decent sum of money from the Dolphins – and didn’t have any other offers to go back to.

Former San Francisco 49ers WR Michael Crabtree has reportedly turned down a $3 million contract offer from the Miami Dolphins despite receiving no offers from any other NFL teams.

The Miami Herald reported that Crabtree, who had a recent workout with the Miami Dolphins, turned down their $3 million offer and has held firm to a demand of at least $4.5 million to play for an NFL team in 2015. ProFootballTalk had previously reported that despite setting career lows in yards/catch (10.3) and yards/game (43.6) in 2014, Crabtree was going to “wait however long it takes” for the right offer from the right team (perhaps a playoff or Super Bowl contender) to make him an offer.

The Dolphins are in need of a deep-threat at WR after trading away star WR Mike Wallace. The team acquired Kenny Stills, who led the New Orleans Saints in receiving yards in 2014, to replace Wallace after trading him to the Minnesota Vikings.

Crabtree played a full 16-game season for only the third time in his six-year NFL career since being drafted No. 10 overall by the 49ers in the 2009 NFL draft. In six years with the team he had just one season with over 1,000 yards (2012) and never recorded at least 10 TDs in a season.

ProFootballTalk reported that the Oakland Raiders are next on Crabtree’s list of workouts. Should the Raiders – who have enough cap space to give Crabtree his intended salary – choose to sign the former 49ers WR it would create a very interesting controversy in the Bay Area. For starters, Crabtree was the receiver the Raiders passed up on in the 2009 NFL draft to select WR Darrius Heyward-Bey – a speedster who was cut after four years with the team and just 140 catches. But the fact that the Raiders play so close to the San Francisco 49ers would make the situation one to watch as well. 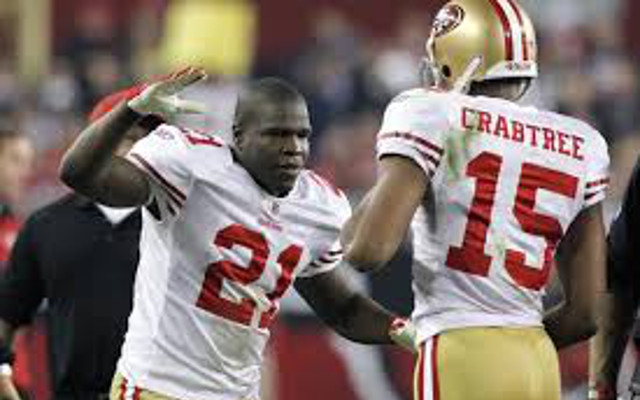