Just at this year’s World Cup seemingly can’t get any weirder, check out the suit here.

The first kick at the World Cup opening ceremony will be made by a paraplegic wearing an Iron Man-like robotic bodysuit controlled by signals from the brain.

Brazilian doctor Miguel Nicolelis led a team of 156 scientists from around the world to create the futuristic exoskeleton, which was designed to enable paralysis victims to walk.

At the World Cup opening ceremony Thursday in Sao Paulo, a paraplegic whose identity has been kept secret will leave behind his or her wheelchair to take to the pitch in the suit and give the tournament’s first kick.

Electronic circuits in the device’s “feet” will send a return signal to the user via an artificial skin worn on the arm, conveying the sensation of movement and contact.

“It’s the first time an exoskeleton has been controlled by brain activity and offered feedback to the patients,” Nicolelis, a neuroscientist at Duke University. 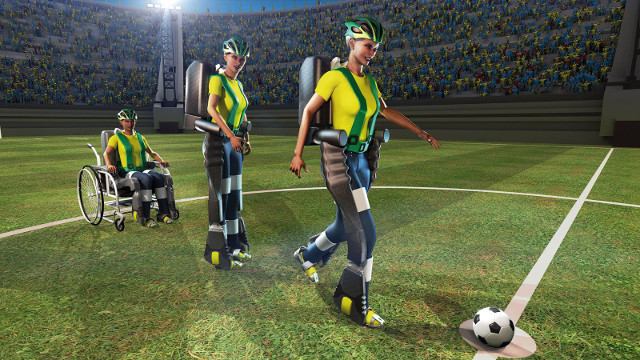 “Doing a demonstration in a stadium is something very much outside our routine in robotics. It’s never been done before.”

His voice contains a mix of exhaustion and excitement, the result of 30 years’ work, more than 200 scientific papers and countless clinical tests that are nearing a spectacular summit.

Nicolelis started down this path in 1984 when he wrote his doctoral thesis on neural connections in muscular control.

He said the idea for the suit came to him in 2002, when scientists were just beginning to explore robotic exoskeletons.

“In 2009, after we learned Brazil was hosting the World Cup, they asked me for ideas to show Brazil in a different way than the world usually sees it. That’s when I suggested doing a scientific demonstration to teach people that Brazil is investing and has human potential to do things beyond football,” he said.

Nicolelis said he and a team of some 40 people have barely left the lab since March, when they arrived in Sao Paulo, Brazil’s largest city and economic hub, to finalize preparations.

But it’s been rewarding, too, he said, recalling the moment on April 24 when a paralyzed user first took steps in the exoskeleton.

They named the device the BRA-Santos Dumont, a combination of the three-letter sporting code for Brazil and Alberto Santos-Dumont, a Brazilian aviator, inventor and bon vivant who once demonstrated controllable flight was possible by flying his dirigible around the Eiffel Tower.

Some scientists have criticized Nicolelis for ditching academic publications in favor of mass media — he posts research updates on Facebook — and the anonymity of the lab for the lights of the World Cup stage.

Critics have also questioned the practicality of his research and accused him of hogging an unfair share of the Brazilian government’s research budget.

“The funding is the same with or without the World Cup. We’ve received $14 million from the Brazilian government over the last two years. That’s approximately four or five times less than what the United States government invests in a mechanical arm,” he said.

“I don’t see anything wrong with demonstrating a technology for the whole world that has a humanitarian objective and was paid for by civil society,” he added.

More than 65,000 people will be in Sao Paulo’s Corinthians Arena to watch the BRA-Santos Dumont’s first steps in public before Brazil play Croatia in the opening match. Around a billion are expected to watch on TV.